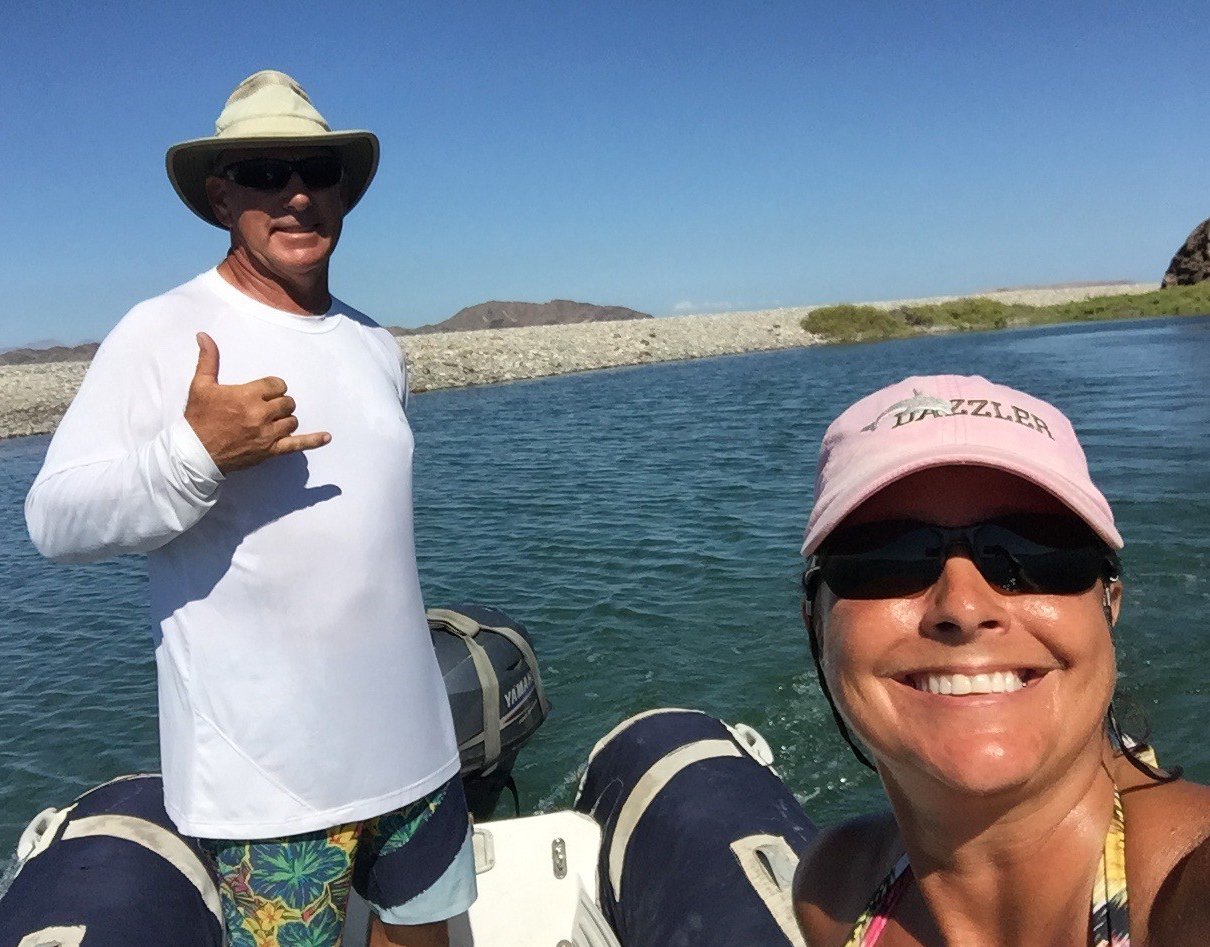 It’s been a whirlwind summer complete with fun filled adventure, amazing wildlife encounters, spectacular Mexican locales and awesome friends to make it all worthwhile. Our travels have taken us 978.4 miles throughout the Sea of Cortez and that doesn’t even include the two trips Dan and I made to the states for provisions, parts and paint nor does it include the trip he made with my cousin, Dan, from SV Karvi, to pick up parts back in May.

It seems like just yesterday but the truth is we started this journey on May 4th, 2017 in La

Paz, California Baja Sur. It has already been a little over four months and I can hardly believe all we have seen and done. We’ve stayed at four marinas and twenty-five different anchorages (several more than once). Yes, it’s been a busy summer to say the least. And to think I always heard retirement is so boring. Well, not on Dazzler! And I’m very, very grateful for that! I’m not the type of girl who likes to sit around and do nothing. I truly enjoy working with Dan and helping to keep Dazzler running well and looking beautiful!

We’ve had unreal encounters with wildlife including having brown-footed boobies landing on our boat that allowed me to touch them as they perched upon the bow pulpit.

We’ve seen literally hundreds upon hundreds of dolphin in pods so large I still can barely comprehend. We even came upon a pod of dolphin with hundreds of birds flying overhead. They were obviously feeding and the sight was absolutely spectacular! It was so incredible we called our friends Mark & Cindy on MV Delta Swizzler who were a mile or two behind us to make certain they stopped to check it out. There were dolphin everywhere and so many birds of different species gathered in this one spot on the sea. SIMPLY AWESOME!!!! It was a NAT GEO moment to be sure!

We’ve watched pilot whales as they jumped and played in an area of turbulent seas between Santa Rosalía and Bahía San Francisquito. We’ve seen at least a thousand sea

lions (my favorite) from shore to shore, island to island. I even got the chance to get on a beach with them in Puerto Refugio. It wasn’t what Dan wanted because he was worried about my safety but he let me go there anyway. Note that I had to beg for days to make this happen and even then it was a struggle. But, Jungle Jilly must always be where the animals are and my Dan makes sure I never miss my chance. He even made certain I got to swim with one in Alacrán. It was one of the highlights of my summer.

Wherever there are sea lions, Dan takes me…even though he despises them. Maybe it’s because one of them ate his prized Sierra off the stringer at the side of Dazzler just before he was going to pull it up and clean it for a supreme sashimi dinner. I don’t know

for sure but I know my amazing guy is always making sure I get to see and experience every possible thing here. Sometimes I feel like Jacques Cousteau. I am an explorer and nothing is too strange or outrageous for me to see or experience. One of my favorite quotes by Cousteau is, “The sea, once it casts its spell, holds one in its net of wonder forever.” This summer I truly began to understand the meaning and depth of these words on an entirely new level.

Halfway through the summer I finally got to swim with a whale shark! THAT was cool!

Dan kept reassuring me they are harmless and just “curious”. Sure….easy for him to say while he’s in the dinghy and I’m the one jumping out of the boat in front of giant beast with a mouth about four feet wide that it could swallow me without even thinking! Harmless, sure…yeah, that’s what I’m thinking………NOT!!!!

Yes, at first I was absolutely terrified but hey, they are “harmless plankton eaters” but you know, what the heck? Life is about risks, right? So, I jumped in with GoPro camera in hand. After all, if you are going to die you should have a recording of the event right???

Dan told me it’s illegal to touch them, which made me very careful, but then the doggone thing started swimming toward me and his tail came right at me. At first I was panicked because I knew if he threw his tail hard one way or the other he could knock me out so I became as flat as a pancake on top of the water and just so you know, I’m not some skinny chick who can easily flatten out. It took some doing to get me there! I was sucking air and using abs I’ve never used in my entire life!!! Hell, I didn’t even know those damn things existed! And, just when I thought I was completely flat and invisible, you know, as invisible and flat as a girl like me can be; the very tip of his tail just lightly brushed my stomach as he swam by. “OMG! What the hell was that? He could have killed me! Am I really still alive?” I gasped. Oh, but by the grace of God, he didn’t and the thing is…it was something truly awesome to experience! No, I’ll never forget swimming with this amazing creature and how grateful I am that he didn’t flip his tale and kill me even though there were four or five others in the area at the same time and they could have taken me out easily. No, on this day Jungle Jilly is “THE” maiden of the sea…she swims with giant whale sharks and lives to tell the tale! WOOOOHOOOO!

Of course swimming with and seeing all of these amazing creatures was awesome but there is no possible way to explain what it was like to encounter a pod of orcas. To this

day my hair stands on end and I get so excited just thinking about it. It was certainly a “once in a lifetime” experience and one we will never forget. When you have an orca playing around your boat, in your wake and surfacing to blow its blowhole in your face…you know you are being blessed by the nature Gods! To say this was the most incredible wildlife moment of my summer  and my life is an understatement! Even Dan was excited and can be heard screaming, “Oh my God” as one of the orcas surfaces beside Dazzler. It takes a lot to get Dan excited about something so this speaks volumes about how amazing this experience was for both of us.

Certainly there are many other things about this summer that are spectacular, other than the wildlife. We fish together and have caught so many great fish. We certainly eat well..that’s for sure! We actually have thrown back more keepers that we kept. We’ve caught Cabrilla (of the Grouper family), Yellowtail, Dorado, Sierra, Pargo and our least favorite…Trigger fish. Dan even caught a Mobula Ray and a starfish. Neither of which he wanted to catch but that’s fishing for you. The ray was a little troublesome in that we have a dinghy with air filled tubes. We were afraid his barb would possibly pop the tube and yet we wanted to let him go safely. Fortunately, Dan, with his vast knowledge of fishing, was able to get our lure, cut the ray free, prevent him from puncturing the dingy and let him go to live another day! As for the starfish, that was just a funny moment. We

can only guess that his lure hit a rock where the starfish was lying and the next thing you know, it was on the hook! It was pretty funny considering we had caught a yellowtail, a skipjack, a mobula ray and finally a starfish that day. Now THAT is an interesting day of fishing!

When we aren’t fishing or sailing, we play games (mostly dominoes), chillax in our hammocks, do boat projects and maintenance and hang out with other cruisers. I’ve met so many wonderful people from such varied backgounds. Each is different yet we all share a common bond…a true love of the sea. I’ve met people who are retired from very high-ranking positions to those who are still working and cruise just a portion of the year. They spend the rest of the year working and saving to do what they love for a few months each year. Then, there are others that literally work their way around the world. They blog or have Internet or remote jobs and do it all from paradise. One thing I’ve learned from each of them is that if you truly want to live in paradise, it’s possible. You just have to think outside of the box! Chasing the carrot isn’t always the way to your dreams. Sometimes you need to grab it and eat some, then figure out how to make it grow.

Of course, I can’t talk about this summer without talking about how wonderful it’s been to be here, FINALLY, with Dan. I’ve never been happier in my entire life! We have so much fun together. I laugh more each day than I ever have and I wake up each morning thanking God for the blessings He has given me! Yes, we play hard but we work hard too. There is a lot to do to keep Dazzler looking beautiful and running great but we both enjoy working on her together. After all, she’s our home! There’s nothing that feels better than sitting back in the cockpit and seeing how beautiful Dazzler looks after we’ve spent the day cleaning her.

And there’s no doubt that we’ve had to learn to work together. We’ve certainly had some challenges along the way. After all, when you live on a 36’ boat you have to learn to compromise. After all, a girl needs room for her shoes and clothes and makeup. What’s wrong with that???? And, of course, a boy needs room for all his “manly toys”. Fortunately we both have an amazing sense of humor and neither of us takes things too seriously. Argue? Of course we do! We are a couple…a couple that lives 24/7 in a “tiny home”. But, we both have a great philosophy about arguing and that is…”Unless it’s life or death, it’s not that important so you need to suck it up Buttercup…we’re in paradise and there’s no time for drama!” And just so you know…that goes both ways!

Honestly, I can say this has been the most amazing summer of my entire life. I’m looking forward to the fall and winter…some cooler temperatures and new adventures in new locales. And, of course, I’m super excited to get started on our planning for the Puddle Jump to the South Pacific next spring. There are lots of things to do before then but for now we are just enjoying life and our time together.

Check out our video below for our “favorite pics” of the summer and stay tuned for more on the adventures of SV Dazzler! We have lots of great pictures and video coming as well as some technical articles from Captain Dan so stay in touch.

See our favorite photos of the summer

2 thoughts on “Four Months At Sea”