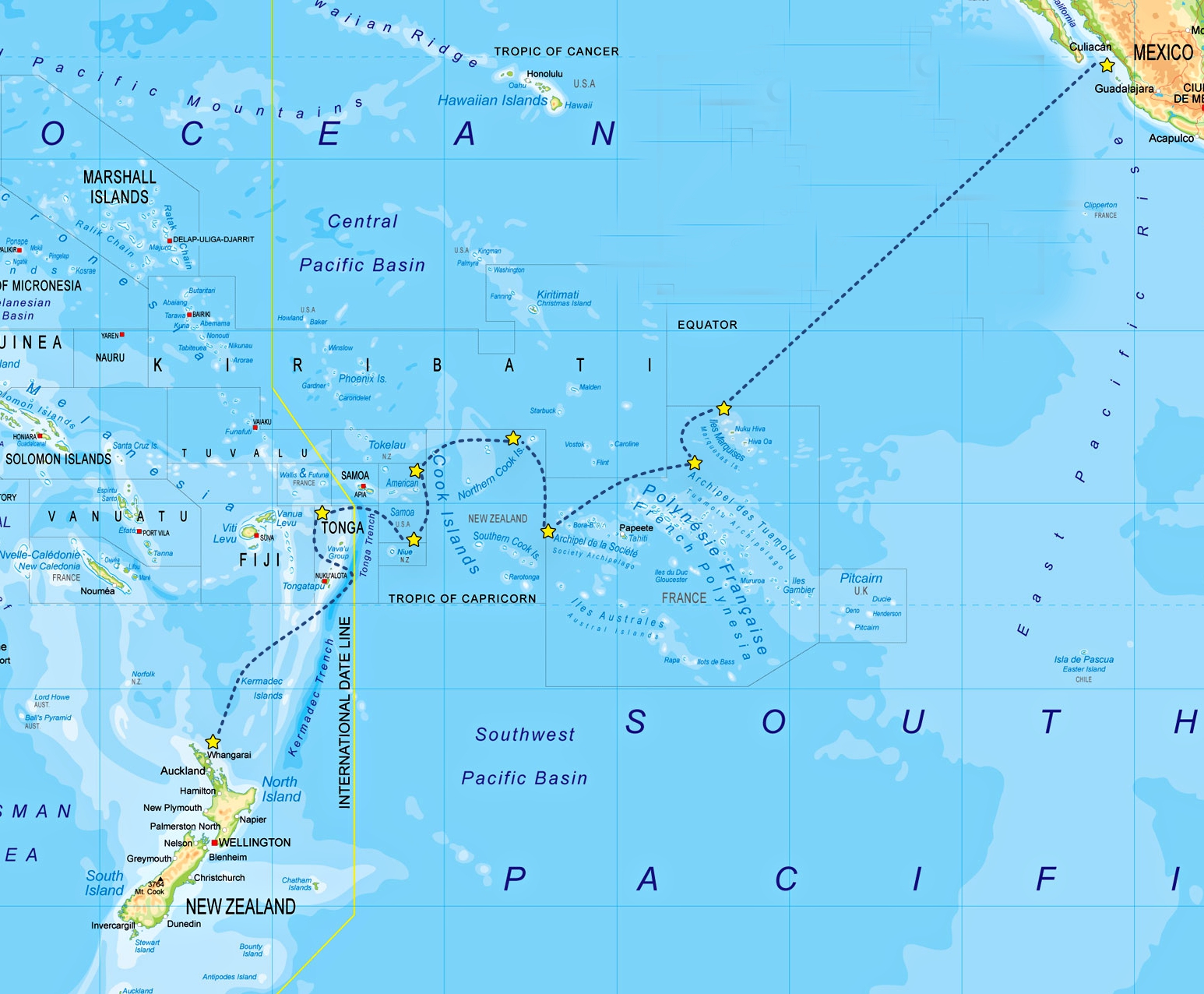 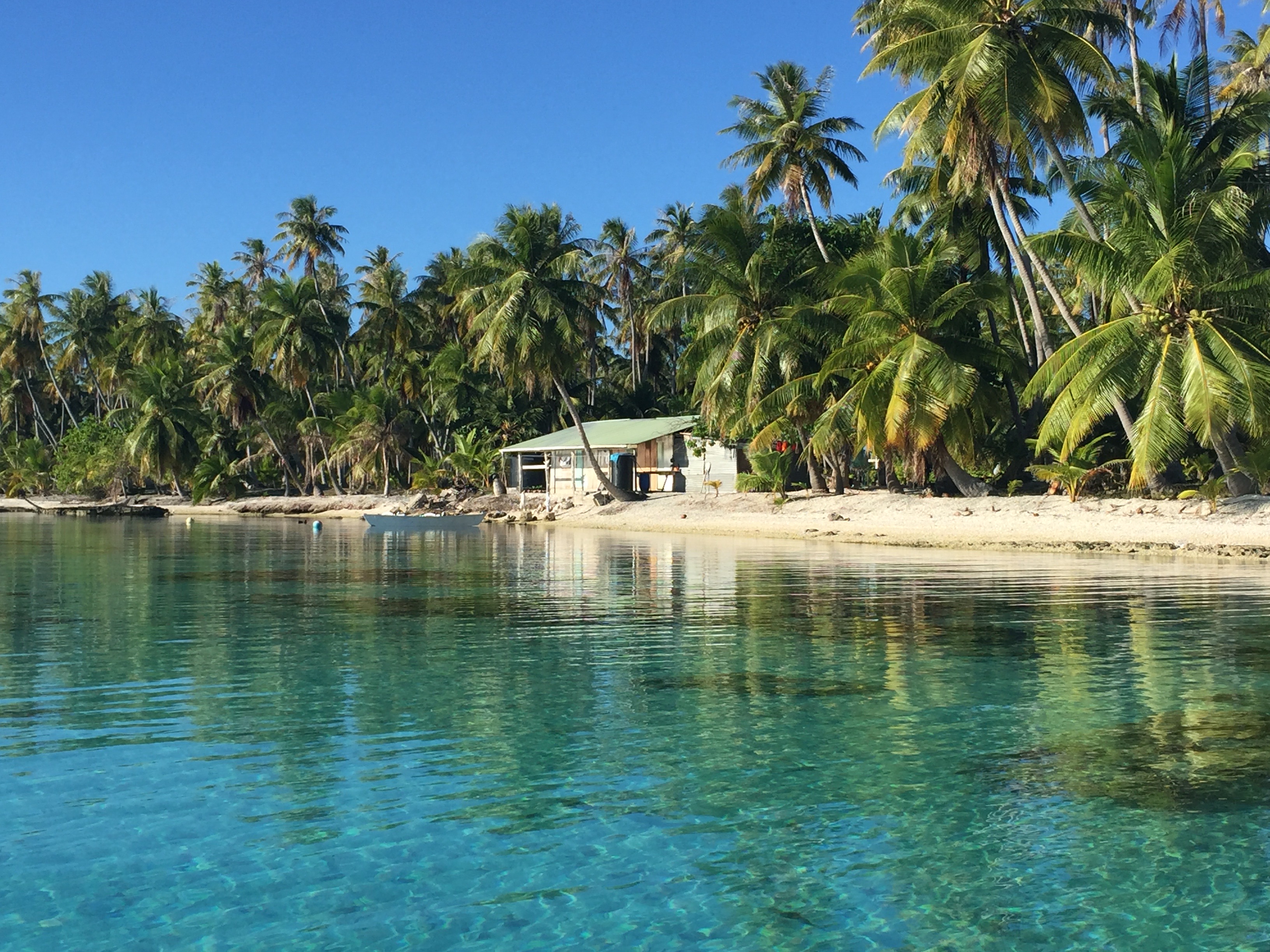 When we left Nuka Hiva on Wednesday morning we had 516 miles to travel to reach the mouth of the pass into the Kauehi atoll in the Tuamotus. I just took over watch at midnight and we had 47 miles left. Unlike the mountainous islands of the Marquesas that you can see rising above the ocean 30-40 miles out, the flat, palm tree lined atolls can only be seen once you are just a couple of miles away.

In case you are not familiar with what an atoll actually is, let me explain. An atoll makes its debut as a volcano. Then a reef forms around the volcano. Over the course of thousands of years the volcano recedes back into the sea and you are left with this big coral rim with a nice sheltered lagoon where the crater was. I read recently about a great way to visualize this. The next time you are in the kitchen, submerge a bowl into a sink full of water so that just the rim is showing and you will have yourself a mini atoll. In the real life version, way out here in the middle of the ocean, people actually live on that thin rim. That’s the truly amazing part to me. I mean we’ve seen some pretty intense seas during squalls. I can’t imagine what it would be like to be living on one of these atolls during a cyclone. Some of them are merely a few hundred feet wide and they are basically all at sea level!

As you can see in the photo from our plotter, the water outside of the atoll is 3000+ feet deep. The max depth inside is about 150 feet. This makes the pass into atolls somewhat tricky to negotiate, as you have to time them for arrival at slack tide because there’s a whole lot of water trying to push through the pass. If you don’t time it right you could be facing an ebb or flow current of upwards of 7+ knots. In some atolls they reach 12 knots! Let’s put that in perspective. Dazzler’s average cruising speed during the entire Pacific crossing was somewhere around 6.5 knots. We get a little antsy if she gets much over her rated hull speed which is around 7.5 knots. If we try to push into an atoll that has an ebbing tide of 8 knots we could end up being pushed backwards into the swell on the outside and risk swamping the boat. If we hit it and are going with the incoming tide it could push us too fast and given the risk of bommies (coral heads), you don’t want that either as you could end up aground because going over your rated speed can make it difficult to steer. Needless to say entering and exiting atolls is something you plan and do very carefully.

Fortunately for us this morning they’ve had little to no wind for days so the swells are nonexistent and all should be fine. Also we chose this for our first atoll as it’s said to be one of the easiest to navigate. It’s wide and its typical max current runs around 4 knots. Our theory…cut your teeth on an easy one first!

We’ve done a lot of reading and studying about how to navigate atolls and I’m sure we’ll be fine. And, unlike the explorers of old, we have tons of data sources for tides. We have our trusty plotter and we have something called open CPN which takes aerial Google earth photos and overlays them on a navigational chart so you can see exactly what is there. Piece of cake, right? Well, I’m not worried. If anyone can navigate these babies it’s Dan. I’m guessing there are but a handful of other sailors out here who have studied this subject as much as he has done. Heck, we had a sailboat call us on the radio just before sundown last night. We could see them a couple of miles away. They don’t have MMSI so we couldn’t bring them up on the plotter and you won’t believe what they asked us. They wanted to know if we had any weather information. Are you kidding me? You are doing bluewater sailing in the Pacific Ocean and have no way to get weather? Well there’s a brilliant move, NOT!

Speaking of the galactically stupid. Here’s another one. Another boat that we know that had issues making the crossing is back out here with no crew. Yep, he’s now single handing his boat through the South Pacific. Don’t get me wrong, there are many sailors that are completely capable of this but not this guy. Just about everyone we’ve talked to about him says the same thing … “He’s not equipped nor is he capable of doing this alone and by doing so he’s going to put other sailor’s lives at risk.” He left Nuka Hiva a day after us and early Monday morning a mara’amu is due to arrive. This is a wind event that will bring 25-35 knot winds. Traversing these atolls during these things is pretty risky. You want to be anchored down in a safe anchorage long before it shows up. We will be because we planned our trip appropriately. In fact it doesn’t show it’s due until Tuesday but Dan built in an extra day to be sure we are good because, you know, weather doesn’t always do what is predicted. I’m just sending out prayers hoping this lone sailor makes it safely to port without injuring himself or others.

After five days at sea we arrived in Kauehi in the Tuomotus. Holy Crap! I thought the Marquesas were spectacular but this…are you kidding me? We survived the pass to the atoll and even made it to anchor down without hitting a bommie. That’s surprising as I am the one on the bow pulpit directing Dan. There’s a lot of pressure up there. LOL

Anyway, we made it and this place is a spectacular anchorage and we even have the anchorage all to ourselves. The closest boat is a half a mile away. We can see the bottom at 20’ but then we could see it when we were crossing the lagoon and it was 100’! That’s a first for me.

We had anchor down beers…our tradition…put up the awning, put on the sail cover, put the dink in the water and now Dan is napping. It’s only 1320 here so there’s plenty of time left in the day. Shortly we will go to shore and dinghy around to find tomorrow’s snorkel spots. In the meantime I’m going to sit here in the Princess seat on the back of the boat and just take in all the beauty that is surrounding us. We’re truly blessed to be here!