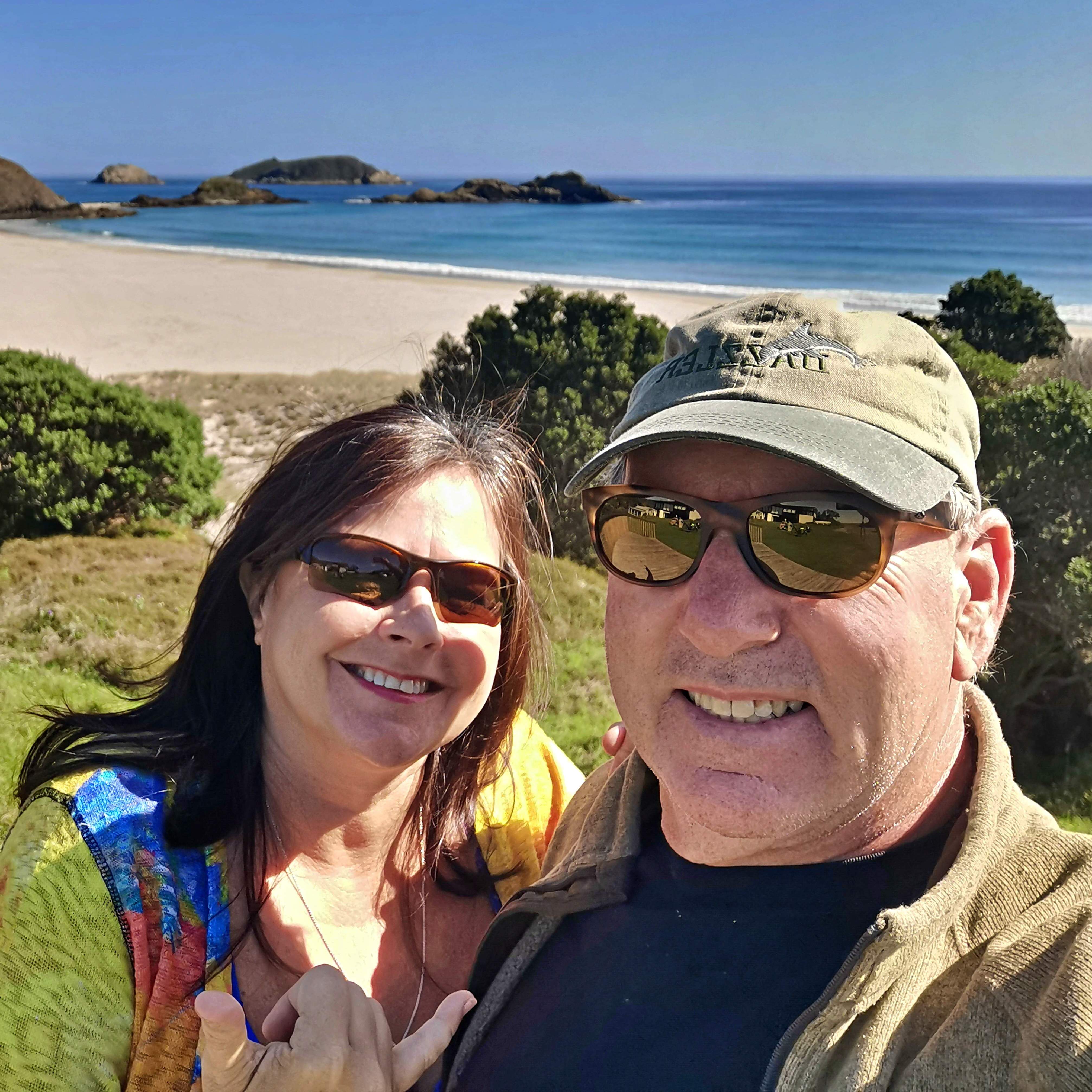 Okay, okay…we know. It’s been a while since our last post. We’ve received comments from several people wondering where we are and what is happening. We certainly appreciate the concern from our followers. Thank you! For all of you who are worried or just want to know what’s going on with the Dazzler crew, here’s a little update.

We’re still here in New Zealand and like the rest of the world we entered lockdown the first of April. You know they could have picked either the day before or day after…. seriously, April Fool’s Day? Guess the NZ government has a pretty good sense of humor.

Lockdown level 4 for us meant that only grocery stores, gas stations and medical facilities were open for the most part. Everyone was to shelter in place just like the rest of the world. We were fortunate here at the marina in Town Basin in that they still allowed us to use the communal showers and laundry facilities. Of course there were strict rules with only one person or family bubble allowed in the building at a time.

The grocery stores allowed only one family member in at a time and quite interestingly, the Kiwis followed the rules to the letter and no one complained. In fact, everyone was in pretty good spirits about it. They just did as asked. This was quite different from what we saw happening in the U.S. so we were very happy to be here rather than at home.

As for the lockdown itself, well, Dazzler became a top-notch medical treatment facility complete with one of the finest Medical Officers around, Captain Dan. Let me explain. The day after lockdown started I was walking up the ramp at the dock to go do laundry and literally tore an inch long tear in my right calf muscle. Sunny beach that hurt! Off to the White Cross Emergency Clinic and a couple of hours later I returned with a lovely set of crutches, some non-addictive pain meds and instructions to lay low and rest for a couple of weeks. Of course Dan’s comment was, “That’s a pretty extreme way to get out of doing laundry.” Well what can I say? It worked! Got me out of cleaning and cooking duty too!

Ten days later I was doing really well and decided I could go without crutches. We took a nice walk around the marina that day and I was thrilled to be somewhat back to normal. That evening Dan decided I could shower at the marina facilities rather than on Dazzler. Not that there’s anything wrong with showering on board but we do use our shower for storage so each time I showered Dan would have to take everything out and then wipe it down after I showered and put it all back. Yes, it’s sort of a hassle. Anyway, off to the showers we went.

In the marina showers you pay $1 NZD for 6 minutes of hot water. You can have all the freezing cold water you want or can stand but it’s pretty darn cold so a buck is pretty reasonable. I usually take two coins with me just in case I need them but most of the time 6 minutes does the trick. Just before the hot water shuts off you hear a clicking sound. That lets you know the cold stuff is on its way. On this particular evening I didn’t hear said clicking sound. Maybe it was the street noise outside or maybe I was just not paying attention. Either way, with face into the water stream I was suddenly blasted with what felt like tiny ice crystals pelting my face and shoulders. Oddly I didn’t “jump” back, rather I slowly stepped back onto my right leg. I guess I was still trying to baby it and didn’t step real solidly on it and before I knew what was happening I was crashing onto the top of the 5” x 5” raised step between the shower and concrete floor outside. Son of a biscuit eater and holy Mother of God did that hurt like hell!

I came down hard on my left side and back. Everything was going black and I started screaming for Dan who was in the other shower.  Of course the door was locked so I crawled over to unlock it. The entire time I’m writhing in pain and screaming for him to get in there before I passed out. He’s in the middle of his shower so he had to dry off and get clothes on. It seemed like it took him forever but I’m sure it was just a couple of minutes.

Add to it that I didn’t get the door completely unlocked so he had to break into the shower room. Fortunately for me he knew the trick to open these type of community doors. That’s my McGiver man! Once again we see there’s nothing he can’t do.

I believe I must have blacked out for a moment or two because I opened my eyes just in time to see Dan come blazing through the doorway with his Captain Save-A-Hoe cape flying behind him. I’m lying on my back on the cold, metal shower floor and everything God gave me was just flapping in the breeze. Things start going black again and I’m hyperventilating as I laid there on the icy floor.

So here I am half conscious, stark naked, cold and wet and he says… “Do you want me to call the ambulance?“

“Do you want me to shove a hot poker up your a**? HELL NO! What is the matter with you?”

That’s a nightmare I’ve played out in my head for years. Just what I want is a couple of paramedics to come in to rescue me while my hoo-ha is sticking out there like the eye of Cyclops and my boobs are flopping from side to slide like I’m bull riding all the while screaming profanities like a sailor on a sinking ship.

“No thank you. I’ll just die here! You can cover me with the shower curtain when I’m gone.”

After I screamed some sense into his foolish man brain we set about getting me dry and clothed. If I was going in an ambulance I was going to be properly dressed. It took about twenty minutes to get me up and dressed. By that time I’d decided nothing was broken and all I wanted was to get back on the boat. Walking was difficult at best so it took another ten or fifteen minutes to walk me back to Dazzler. Here I spent the next few weeks in complete misery being nursed back to health by the ever diligent and assertive Medical Officer who also happens to be the Captain on Dazzler. His tactics are, as he calls them, “firm but fair” and he doesn’t miss a thing but I’ve no doubt he has my best interest at heart.

The bruise itself was massive. It went from my spine around my left side and down my hip and thigh. Leg injury? What leg injury? I have a leg injury? Really…I can’t feel anything but the pain raging through back, my left side and my hip as my bum tingles and with a lovely numbing burning sensation that surely is the work of Satan himself.

I’ve seen the doctor multiple times throughout the lockdown for this injury and it turns out I fractured a vertebrae and compressed three disks. Yeah, I know. I’m a go big or go home kind of gal. The thing that bothers me most is I don’t even have some great story filled with pirates and rum to go along with it. I’m just simple a middle aged woman who walked up a ramp, tore a calf muscle and then fell in the shower injuring her back.

I’m sitting here thinking that I’ve traveled over 15000 nautical miles in seas that most normal people would never dream of sailing. I’ve walked on decks that were pitching and rolling 30° from side to side with green water crashing over me. I’ve used sharp knives preparing meals in the same conditions and yet my worst injuries happen walking up a freaking dock and taking a shower. Where’s the adventure in that???

One quick note here about the New Zealand medical situation. Here in NZ if you are injured as a result of an accident it doesn’t matter if you are a citizen or not, your medical care is covered almost 100%. Throughout all of the doctor’s visits, vascular scans, x-rays, medications, specialists etc…we were only out of pocket around $200 USD! In the states we figure we’d already have been up close to $10K.

And, last week the specialist decided they wanted me to have a battery of blood tests to be sure I don’t have osteoporosis or some other underlying condition that caused my bones to break so easily. They took blood for 19 tests! We paid the equivalent of around $220 USD. I did a little research. In the US these blood tests would have run between $5-8K! So for less than $500 USD I’ve received some of the best care I could ever imagine. And the doctors and staff at White Cross were absolutely fabulous. I’m very grateful for each of them. One things for sure the Kiwis could certainly teach the U.S. about medical care and costs. Of course we know nothing will ever change there because big pharma & hospitals etc…have their hands in the pockets of the politicians. OK…enough about that…this is not a political blog.

Anyway, as you can see we haven’t had much to report from the decks of Dazzler in the past six weeks and there was no way I could sit at the computer and type to even give you the info on the injuries. No, I spent the first month pretty much flat on my back. I do have to say that my love and the official Dazzler Medical Officer has done an absolutely amazing job taking care of me even if at times I felt like an unruly child being controlled  by a strict parent. He is truly one of God’s angels and do know I’m so very blessed to have him in my life. Thanks Dear!

We’re now in stage 2 lockdown, which means everything is pretty close to being back to normal. We have to check in and out of restaurants and stores, no groups larger than 100 people and there’s still a lot of social distancing going on but people are out and about again and that includes me. I’m still a long way from being completely healed, at least a couple of months more, but I’m doing much better and for that, I’m grateful.

Now that I’m up and about again we promise to get more posts up there for you. Hope everyone is doing well and handling the crisis as best as you can.

P.S. As for how we feel about being in New Zealand throughout this whole Covid thing, we couldn’t be happier. They have handled this like true champions. As of this posting we’ve only had 22 deaths and just 1504 confirmed & probable cases. It’s been truly impressive to watch how the Kiwis and their government took this on.

2 thoughts on “Dazzler, The Medical Ship”