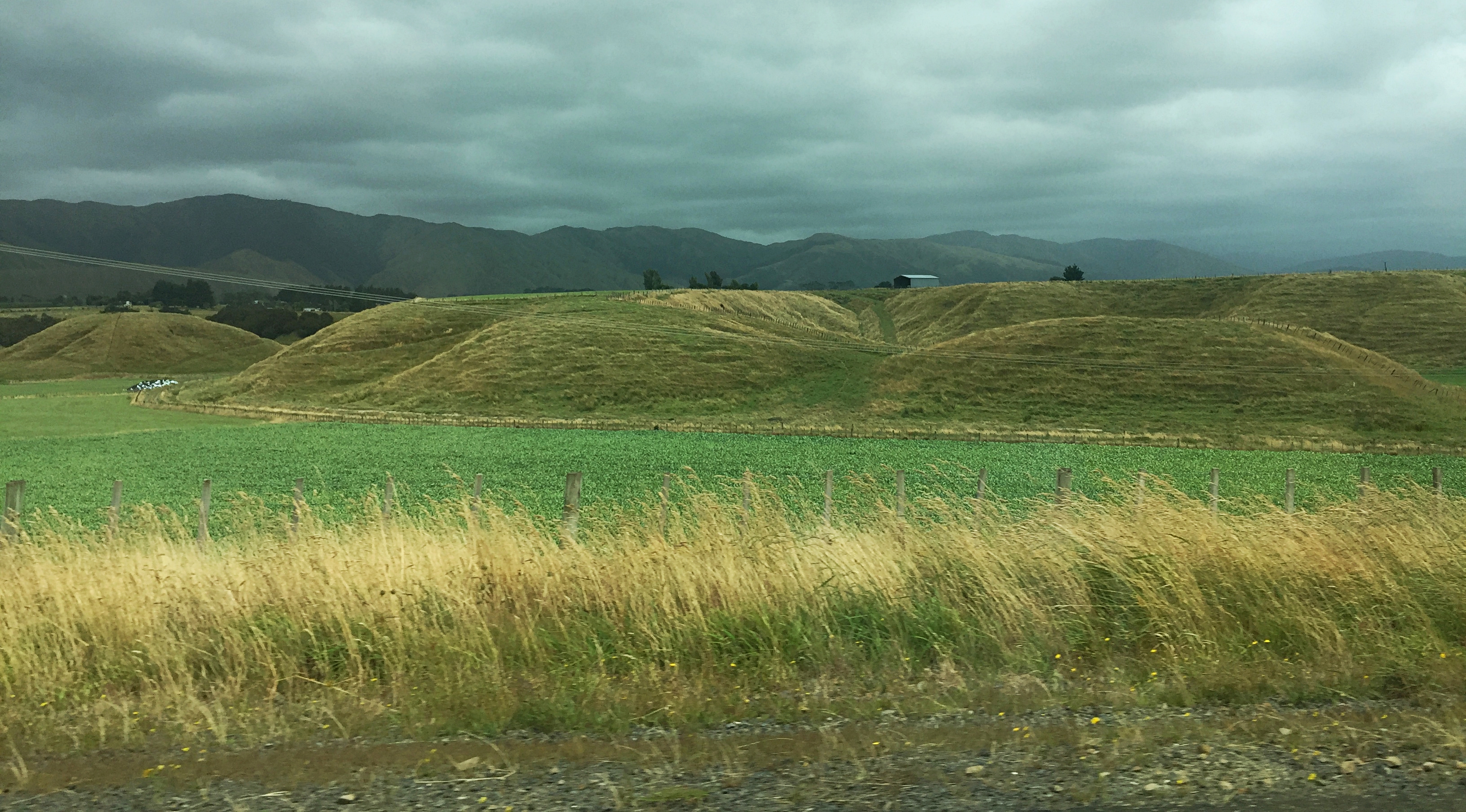 We got up early and headed out this morning. We had a short two hour drive from Rotorua to Waitomo. The drive across the country was beautiful. There’s lots of lush, green farmland and sheep are everywhere.

It seems that everywhere you go in this country there’s a bakery on the corner so along the way we stopped in a little town called Kihikihi at Viands Bakery. What an amazing stop this turned out to be. They had a wonderful case full of the most decadent looking pastries and my personal favorite….meat pies. I’m becoming addicted to these things. It’s going to be a sad day when we leave and I can’t get them anymore. Anyway, in reading about Viands after we left I see they are famous for their award winning pies. The New Zealand Herald says “They have won more pie awards than most people have had hot dinners.” One thing for sure, our food was spectacular!

With full bellies we headed out for the last hour of our journey but before leaving this charming little town we stopped back up the hill at a small historical area. They had an old police station, jail, cottage and church. It was Sunday so they were closed but we did spend a half hour or so walking the grounds and enjoying the beautiful sunshine.

When we arrived in Te Kuiti which is just minutes from Waitomo, our first order of business was to stop and check into Tutanekai’s Cottage, our Air B&B for the night. Well, we certainly hit the jackpot with this little gem! OH MY! This little house was absolutely perfectly appointed and the art and decorations made it so special. It even had beautiful gardens outside where you could just sit and relax and enjoy the flowers and outdoor decorations. And, our Host and Hostess even left freshly baked raspberry muffins on the table and milk and eggs in the refrigerator.

Janet & Theo, our hosts, own the home and live next door in a beauty of a place that is a renovated schoolhouse. What delightful people! They gave us the warmest of welcomes and offered to provide us with anything at all that we needed from information on the area to fresh vegetables from their own garden. They even invited us for cocktails with their friends later that evening. We just can’t say enough about these fabulous people and the amazing accommodations. They even had beautiful robes in the closet for us to use and little shampoos and lotions in our rooms. It was like staying in a five star resort. If you are ever in the area and need a place to stay, this IS THE ONE! But I’d say you better book early because this place is going to take off like gangbusters. Thank you again Janet & Theo. Our stay there was the highlight of our trip!

We checked into this delightful house and took a breather for a bit. Then, it was off to the Waitomo Glowworm Caves. New Zealand is home to an interesting species of glowworms. The Arachnocampa luminosa is only found here. The glowworm is actually the larval or maggot stage of a fungus gnat fly. The adult looks a bit like a mosquito. They typically spend their entire lives inside of a cave.

The reason they are called glowworms is because they actually glow with a bluish light. This is created from a biochemical reaction called bioluminescence which takes place at the terminal end of the renal glands of the larval worm. This light is called a “cold” light which is pure and has almost no associated heat. They use this light to attract small flying insects that are lost in the darkness of the caves. Adult female can also produce this light which is said to help them attract a mate.

The glowworms attach a silk hammock to the cave ceiling. They gather food by building a network of silk threads that hang vertically around the hammock. The silk threads have droplets of a very sticky mucus that traps the flying insect. Once trapped the worm simply pulls the thread up to the hammock and into its mouth where it sucks out the juices and spits out the hard parts. Kind of like a human eating chicken wings. LOL

The cave here in Waitomo is absolutely huge! As we were guided down into the cave they stopped in an open area called the cathedral, and for good reason. It’s an enormous open area with spectacular acoustics. Apparently some people actually hold their wedding in this part of the cave. It would certainly make for some interesting photographs. Speaking of which, the photos here are either from their Facebook page or from photos I took of some postcards Mary purchased. They won’t let you take photos inside the caves. Of course they will happily take them for you and sell them to you. It seems everyone has their hand out in this country.

The tour of the caves lasted about an hour. They led us through the cathedral area and around some tunnels and then we went down into an area that is completely black, with the exception of thousands of blue dots that look like stars on the ceiling. Once you go down the stairs you are escorted onto a small boat that holds eight or ten people. The guide then pulls the boat through the water using these lines they have installed between the cave walls. This part of the tour maybe lasted about ten minutes before they led the boat out into the light and dropped us at a small dock.

While it was certainly an interesting experience, we’re not sure it was entirely worth the $53 NZD/person entrance fee. (That’s approximately $36 USD) There are caves in New Zealand that you can explore for free and see the same things. Knowing what we know now we’d probably have opted for that option. Don’t get us wrong, they have something pretty cool stuff to see there but the price is a little steep for what you get. Apparently, however, they have no shortage of tourists willing to spend the money so as they say, “it’s all supply & demand.”

After leaving the caves we stopped back in town at a little restaurant at the old railroad station for an early dinner. It’s called the Stoked Eatery and the food was pretty tasty. It was a nice warm day and we enjoyed our meal sitting outside watching the trains come by. Then it was back to the house to relax and get ready for the long drive the following day.

Next stop….Wellington, the capital of New Zealand.

Oh yeah, one last thing….it appears Dan has his own line of lawnmowers. We saw this one in a store window in town here. Who knew?