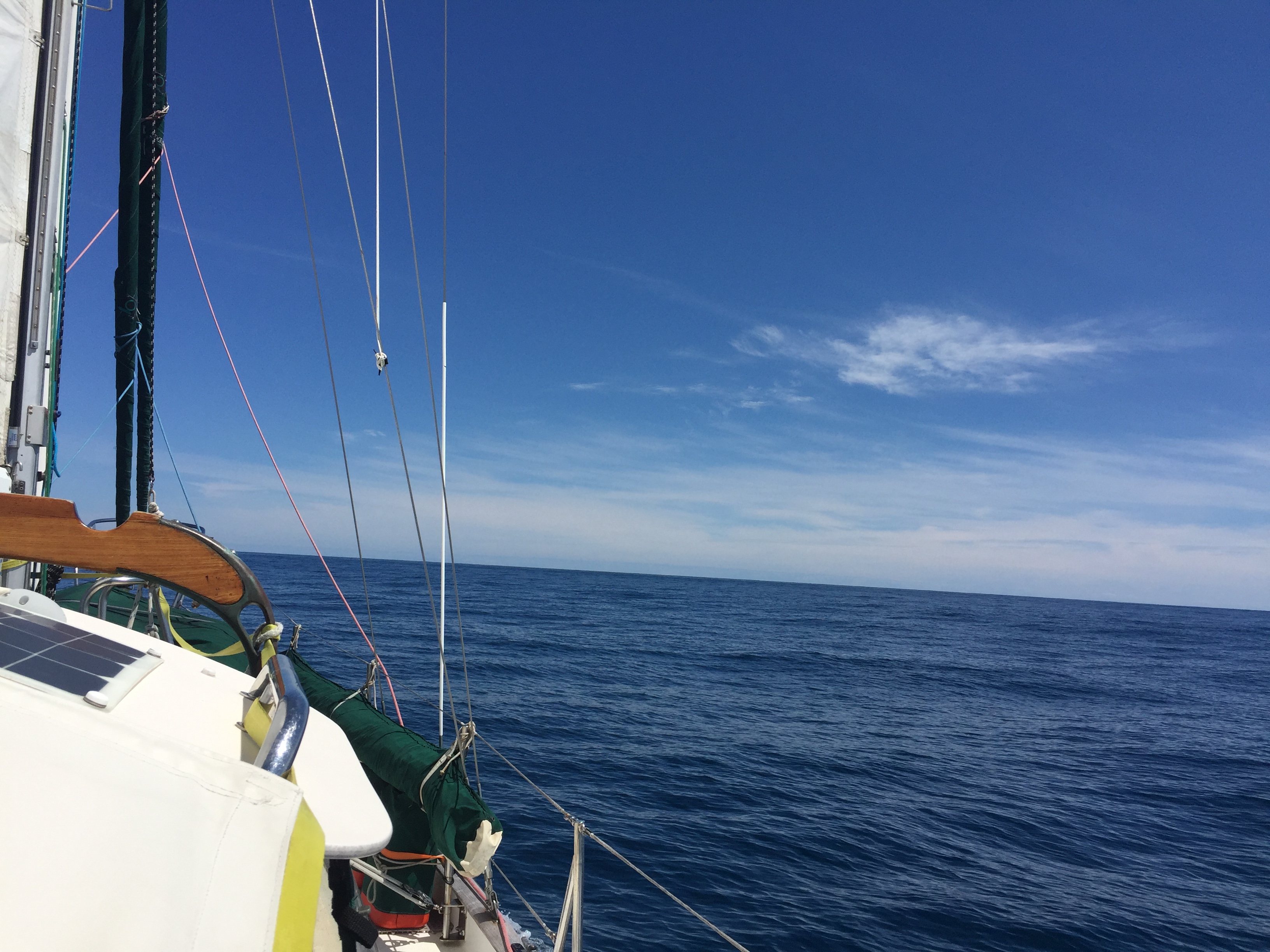 The time has come for us to say goodbye to the wonderful islands of the South Pacific as we watch Nuku’alofa rise and fall with the southeasterly swell.  The cruising season is winding down and we are now en route to Whangarei, New Zealand.  Dazzler is in need of some maintenance and some minor repairs and we plan to enjoy time in a new country.

As we prepared to leave, I was watching the weather daily and sometimes twice a day.  There has been a high pressure in place over the east coast of New Zealand for more than a week.  The South Pacific Convergence Zone (SPCZ) was somewhere near Samoa and southeasterly trade winds have accelerated in velocity as a squash zone has developed with 20-30 knot winds.  Additionally the swell generated by these increased trade winds has grown to 2.5-3.5 meters.  Here in our anchorage we have had steady 15-30 knot winds out of the southeast for the entire five days we’ve been here.  The wind generator has been doing an awesome job while the days have been filled with clouds and the occasional shower.

The questions, not just in our minds, but the minds of cruisers on the other 13-16 boats anchored nearby is when will the weather subside and when should we leave for New Zealand?  You can hardly head to shore without encountering another cruiser with the question of “when are you leaving?”

We don’t have the luxury of Al Roker weather forecasting available to us.  We rely on weather downloads using our single side band radio (SSB), satellite or some other forms of electronics to obtain our weather information.  This is a new weather pattern for us that we haven’t experienced before. In Southern California or in the sea of Cortez when the wind was 15-20 knots, most of us held off for a better weather window.  That is not the case here in the southern Pacific Ocean.  With cyclone season closely approaching, brochure sailing days ARE 15-25 knots with 2.5-3.5 meter swells.  You get what you get.  So, it’s time to put on our big boy pants, throw on the foul weather gear and accept that it’s going to be a wild ride for over 50% of the eight day passage.  Buckle up Buttercup!

We decided in addition to the weather tools we have, to enlist the assistance of a Weather Router. There are a couple of them available for hire.  We chose to use Bob McDavitt aka MetBob.com.  Bob has been weather forecasting for over 30 years and his specialty is the South Pacific region.  Information from Bob indicated that our weather window was narrow and not really much in the way of 10-15 knot warm tropical breezes with easy following seas.  No!  In fact, it was more like 18-25 knots from the Southeast with 2.5-3 meter swells at 10 seconds.  Okay, I guess if he says “go”, we go! The reason for our departure into this kind of weather is the back side of our passage.  Eight days from now a series of pre summer trough patterns are going to start up.  That means a series of troughs riding over New Zealand from west to east with 15-25 knot south westerlies.  Since we will be arriving on the north island’s east coast our arrival would be into those winds and swells which I hear would not be pleasant.  Hummmm!   So, we decided to go!  We had already checked out of Nuku’alofa and were in standby mode for departure on a good weather window so we were prepared to leave but  that nagging question came up again, “when do we commit and actually go?”

Our option was Wednesday evening or Thursday morning.  MetBob had set a time of 1300 hours departure for Thursday, but he indicated that we should try to leave a bit earlier because one of those troughs was possibly going to be greeting us on our arrival date.  We chose to leave on Thursday morning.  After a nice diner, a few adult beverages and a good night’s sleep. Check, check and check! We’re ready to go.

I was up about 30 minutes earlier than normal at 0430 hours.  I wanted to sit back with a cup of coffee and go over the weather router’s suggestions and view the weather sources available to me one more time.  Those of you who know me know I’m not anxious about many things.  This trip, on the other hand, had me a bit on edge.  Sailing in weather you have not experienced before would make anyone anxious, right?  I mean I had a package of Depends on stand by if it got too bad, a drogue, an EPIRB and a flare gun. What could go wrong?

Just after dawn we were anchor up and underway making way towards the northwest entrance to the Nuku’alofa bay.  An hour and a half later we were out of the bay and setting course for our first waypoint.  This isn’t so bad.  Duh!  We were in the lee of the Nuku’alofa island group.  Wait for it!

Motor is now off, we have a double-reefed mainsail and the jib hoisted and we’ve settled into about 6-6.5 knots.  Once we passed the protection of the southern edge of the Nuku’alofa island group and Duff’s reef, there they were, the 2.5+ meter swells.  It’s a bit daunting when you’re standing in your cockpit and you look off your port side and see nothing but a large swell of water…Gulp!  I reminded myself that we must endure this to get to New Zealand.  Okay all better now.

It’s now been two days into our journey and we are approaching Minerva Reef where we make our next course change.  A little more to the west please.  We still have over eight hundred nautical miles to travel to our destination.  The winds have eased a bit to 18-20 knots and the sea state has also eased to 1.5-2 meters.  All in all it hasn’t been too uncomfortable for me.  I’m sure Jilly would tell you different from her perspective.

The evening after passing Minerva Reef I was on the evening watch.  I was running the main engine to charge the batteries for the night.  About an hour after staring the engine, the high temperature engine alarm went off.  After letting it cool down for a bit, I restarted the engine and because it seamed to be working I shut it down. A short time later I started the engine to charge the batteries and it seemed to still be working fine. For now!

The next evening, the same thing occurred again.  High temperature warning alarm.  I immediately shut down the engine and woke Jilly.  We needed to diagnose what this issue was.  I first removed the companionway stairs and cowling to expose the front of the 4JHE Yanmar engine.  There were no visible fresh water leaks and the fresh water reservoir had an ample amount of water in it.  Next item to check was the raw water system.  I closed the raw water valve and removed the hose to check for any obstructions.  There was a generous flow of sea water that flowed in when I opened it. Next step was the raw water pump. I removed the cover of the raw water pump and observed all the vanes to be in place.  I did not actually touch the vanes or wiggle them but they looked just fine.  So, I put the cover back on and moved onto the exhaust heat exchanger mixing elbow.  Everything seemed to be in place.  When I restarted the engine the high water alarm came on again after a short while.  Keep in mind we were sailing in 18-22 knots of wind with 2.5-3 meter swells from the port quarter and by now it was 0200. I needed to get some sleep so I decided rest needed to happen before I could continue working on the engine. I left Jilly on watch and hit the bunk.

A few hours later after some sleep I was ready to tackle the diagnosis.  I decided that whatever was going to happen I was going to replace the raw water impeller first. Whatever else needed to be fixed I would work on next. But first we needed a calmer work environment. We decided to hove to which is like parking the boat in the ocean.  With a double reefed main and a patch of headsail we put Dazzler into the hove to position.  Once she stabilized we were sliding sideways at about .5-1 knot and we were heeled at about 20°. This made for a much calmer work environment.

I got the stairs and cowling removed which gave me good access to the raw water pump cover.  Once I had the impeller removed the problem was very obvious.  Six of the eight vanes had splits along the hub with about a ¼” holding them in place.  When the impeller is not spinning they looked good from the open cover.  The newer Yanmar impeller had 12 vanes on it.  Once it was all slapped back together….success!  We put everything away and were ready to get back underway.  We were only hove to for about an hour and a half.

For the next several days the weather continued to improve in our favor.  We were still striving to get ahead of a low pressure system that could potentially cause us some issues upon our arrival.  The winds had dropped considerably requiring us to supplement with the Yanmar motor so we could beat the approaching system.

The morning of our eighth day we were just off the northeast coast of New Zealand.  It was a cloudy, cold morning when we arrived at Bream Bay Head.  We encountered a small pod of dolphins prior to Bream Bay Head and at the headland there were thousands of birds floating on the water.  We decided that some more of Jilly’s dad’s ashes should be spread over the water at this point.  After a short stop we continued into the bay where we stopped at Marsden Cove Marina and cleared in with New Zealand Customs authorities.

We had travelled just over 7500 NM from Banderas Bay in Mexico to Whangarei, New Zealand in seven months and one day. It was quite a journey.