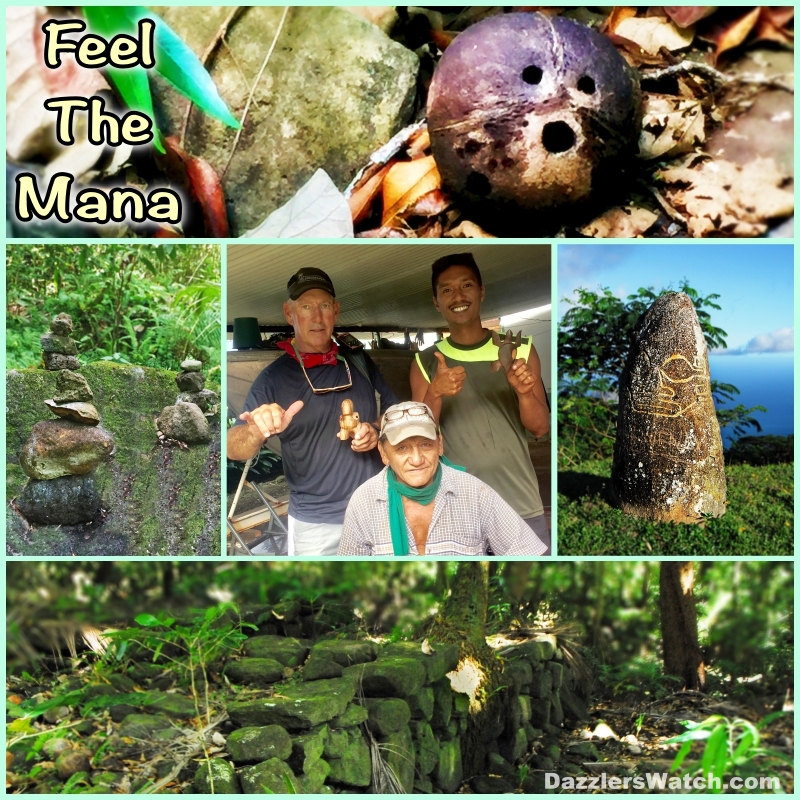 Jilly and I have an outgoing spirit with a certain twist that can’t really be explained very easily. It is something that has opened doors for us to see the local cultures a little below the surface. We greet the locals with a smile and a friendly “Bonjour” or “La Orana” and always say, “Merci” or “Maru’uru” when we’ve been served, assisted or in general courtesies. We try to learn the first names of those we regularly meet and greet them by their first names when we see them again. In watching other cruisers around us, it appears that we are just a small percentage of those cruising the islands that do this kind of thing.

Last Saturday evening, we decided to go into town for one of our last dinners for a while. We went to the Moana Nui pizza restaurant. It turns out that the restaurant was decorated for Mother’s Day here in the Marquesas. The restaurant was entirely reserved by locals except for one table for two near what we thought was the back of the restaurant. It actually turned out to be near the front entrance. They brought out the hand written menu and explained it to us. They had prime rib for dinner. Well why not? So we both ordered the prime rib and about fifteen minutes later our food came to the table. As it turns out, they cook it a bit differently here on the island. They slice the rib and then grill it to medium rare perfection. It was HUGE! I mean it covered over half the plate and it was about one and a half inches thick. It has been a long time since I have had prime rib, but I can tell you this, it did not suck.

Shortly after we ordered our meal, Kevin of Nuka Hiva Yacht Services, his wife Annabelle and their children entered the restaurant and sat at the table next to us. Once again we got some more insight to the local culture from them. A three piece group of men began singing and playing a keyboard and an electric guitar. Somehow we had stumbled into another cultural event. We were the only white cruisers in the restaurant except for Kevin and he is a transplant from Pasadena in Southern California. He is considered more of a local than anything else.

We see the many cruisers with a take attitude. One that is stopping to get what they need before moving on…somewhat like locusts. Like I have said before, everything on these islands with the exception of the fresh fish and local fresh fruits and vegetables has to be brought to the Islands. And while we also participate in buying resources from the local market we also believe in putting back into the community. When we stop at the Snack Shack or the Tempatutui  restaurants where WiFi is available, we always buy something. One thing I’ve learned in water world is that nothing is free. These businesses have to pay for the WiFi for their guests to use. If you don’t buy anything and use their Internet, are you really a guest or a mooch? We were sitting in the Tempatutui  restaurant sipping a frosty cold beer we bought and were using their WiFi connection. Another solo male cruiser was sitting behind us using the Internet and he had not purchased anything from the restaurant. After about 10 minutes, we lost our Internet connection. No big deal right? A few minutes later, the woman running the restaurant slowly walked by our table and slid us a piece of paper with a new password access for the WiFi. And then a few minutes later the man approached us and asked if we had Internet. We told him that we didn’t think it was working and that we were working on photos and reading saved articles. Perhaps a little white lie, but we knew the moment the woman slid us the new password what was happening. So, I got up and ordered a second round of beer. Jilly walked up to the bar to get her drink and slid the piece of paper with the password on it back to her. The woman got a big smile on her face. As it turns out, she speaks English and overheard what we had told the man. We just smiled back at her and then walked back to our table with our beers.

While sitting on Dazzler in the anchorage, we have been watching the locals canoeing in their single outrigger style canoes most afternoons. While walking around town, I had noticed two distinct canoeing clubs. The last night we were in Taiohae Bay, I was sitting in the cockpit playing my ukulele when one of the paddlers stopped by Dazzler. He had traditional tattoos and wore a choker around his neck that had tusks from a wild pig he had killed. He explained that the pig had killed his favorite dog during the hunt, so he had some of his dogs bones also on his choker. He explained that he and the others have been out practicing for a competition that occurs at the end of June. We enjoyed a nice conversation with him before he had to get back to practicing for the competition. We saw him later that week and he smiled and exchanged hellos with us.

Jilly and I believe that somehow we are giving off some kind of vibe, karma or mana that opens doors and opportunities for us in these small communities. Perhaps it is adventurous curiosity or perhaps we are seen by our actions or its mana. I’m not saying we are the only cruisers that act like this. It just seams to be a rare personality trait that is not viewed in other’s actions.

I know I have mentioned that in the recent past during our hikes to waterfalls and other island ancient grounds, we have both felt the presence of a spirit that has surrounded us. It is a feeling that can’t very easily be explained. And it is one that is best described by the definition of mana.

Mana is described as a:

(noun) prestige, authority, control, power, influence, status, spiritual power, charisma – mana is a supernatural force in a person, place or object. Mana goes hand in hand with tapu, one affecting the other. The more prestigious the event, person or object, the more it is surrounded by tapu and mana. Mana is the enduring, indestructible power of the atua and is inherited at birth, the more senior the descent, the greater the mana. The authority of mana and tapu is inherited and delegated through the senior line from the atua as their human agent to act on revealed will. Since authority is a spiritual gift delegated by the atua, man remains the agent, never the source of mana. This divine choice is confirmed by the elders, initiated by the tohunga under traditional consecratory rites (tohi). Mana gives a person the authority to lead, organise and regulate communal expeditions and activities, to make decisions regarding social and political matters. A person or tribe’s mana can increase from successful ventures or decrease through the lack of success. The tribe give mana to their chief and empower him/her and in turn the mana of an ariki or rangatira spreads to his/her people and their land, water and resources. Almost every activity has a link with the maintenance and enhancement of mana and tapu. Animate and inanimate objects can also have mana as they also derive from the atua and because of their own association with people imbued with mana or because they are used in significant events. There is also an element of stewardship, or kaitiakitanga, associated with the term when it is used in relation to resources, including land and water.

I know it is easy to get caught up in having to get something fixed that broke on your travels to paradise. Having to order some critical part for your boat. Or, your crew just jumped ship and you’re stuck looking for more crew. Whatever the many reasons it could possibly be, don’t forget to smell the coffee, flowers, peanut butter, crepes or experience the mana. Perhaps by slowing down, looking around or adding a few more items to your daily routine, additional doors may be opened and opportunities could unfold right before your eyes to provide a deeper cultural experience while visiting paradise and feeling the mana of the land, people and natural resources.