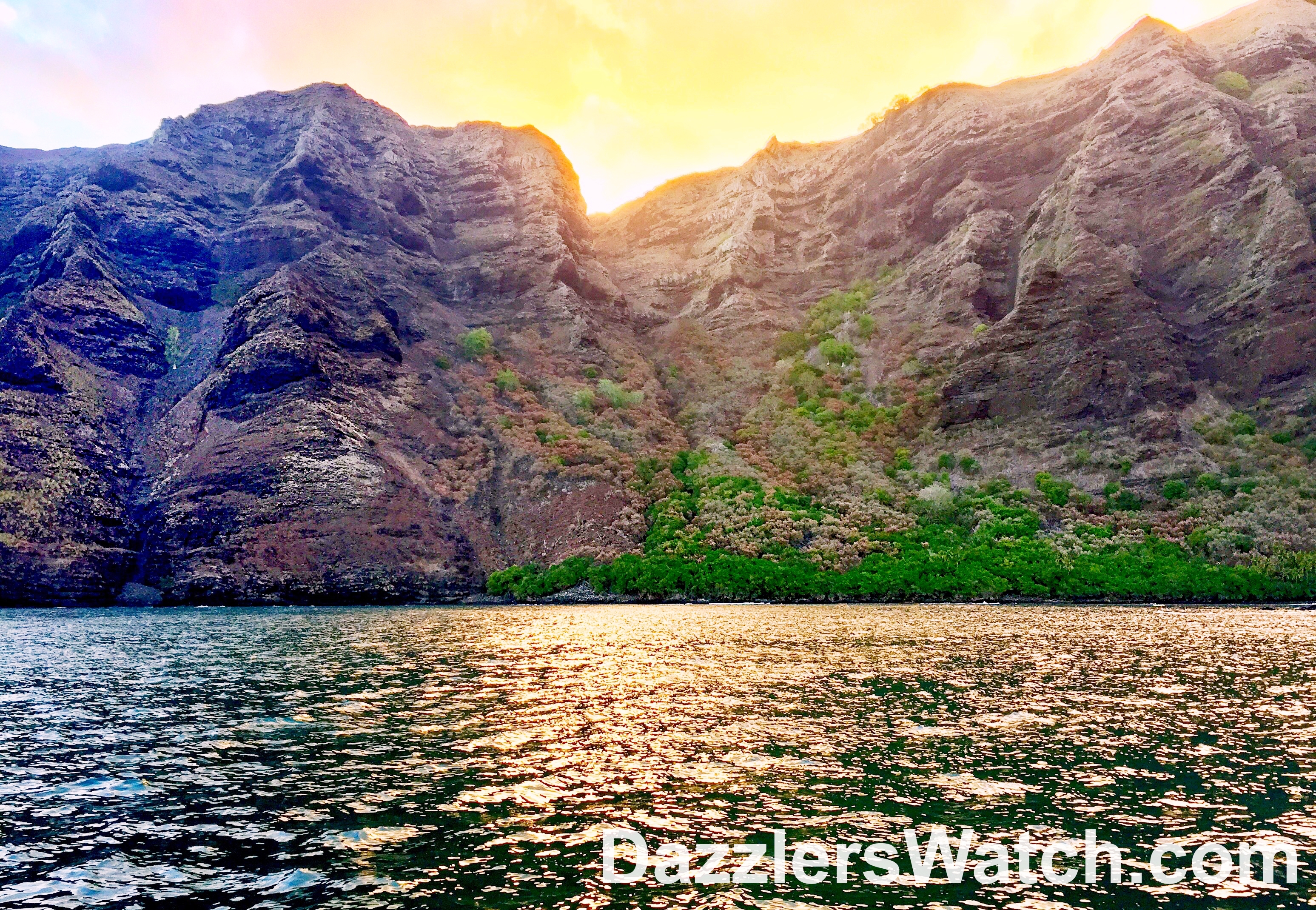 We arrived here in Daniel’s Bay on the island of Nuka Hiva. Yep, my honey has his own special place down here. It is just four miles from Taiohae Bay where we’ve been for the past week. It’s a nice little bay with rocky cliffs on one side and a semi-white sand beach on the other. So far there are just five boats here. It’s a nice change from where we were surrounded by fifty or sixty other boats in Taiohae Bay. We know all the others here with the exception of one French boat.

They tell us there are sharks here in this bay so no swimming. Ernie on SV Patience was fishing from his dink last night and said he saw four or five sharks chasing the fish he caught. And, he saw a Tiger shark. They are pretty territorial and can be aggressive. It’s okay, I don’t need to swim here. Plus we’ve had quite bit of rain this week which means all the run off from the mountains is making the water a bit murky. I’ll wait until we get to the Tuomotus where the water is crystal clear. If I’m going to be eaten I’d at least like to see it coming.

Apparently a few years ago they filmed an episode of Survivor here. Never watched it so I couldn’t tell ya anything about it. The waterfall here is said to be the 3rd tallest in the world however I can’t confirm that. I doubt we will hike all the way to it as you have to wade, waist deep through a murky pond filled with fresh water eels. They say they don’t bite but will rub against you and may nip at your legs. No thank you! I’ll pass on the eel experience.

I’ve read that you can hike about halfway there and see 60-70% of the falls so we may do that. I really want to see the ancient ruins along the way so we’ll see. SV Nightide and SV Patience are leaving tomorrow for the 4-5 Day trip to the Tuomotus. All of us are getting together for sundowners and nibbles on Nightide this afternoon. Like I’ve said before we really don’t feel like strangers in a strange land here as it seems we have friends around every corner.

Ed & Linda on SV One Fine Day are coming in as well. We’re becoming pretty good friends. I wish we could head to the Tuomotus with them this week but we have to wait for the generator so we’re stuck here for about two weeks. Of course there’s worse places to be stuck I guess.

This afternoon Dan is napping and I’m in the hammock looking for sharks. Hope I get to see a few….from the safety of the boat of course.

Today is a new day and we are loving Daniel’s Bay. Yesterday we decided to go on a hike with Ed & Linda to the waterfall for the day. When we were getting ready to leave we saw a black tip shark come out of the water and grab a fish just about twenty feet from the boat. That was amazing as his whole body came out of the water while he chomped down on his prey!

We headed to the beach on the dink and realized we needed to add air to the dinghy wheels so had to head back to the boat. On the way we saw a five foot hammerhead shark swim right along side of the dinghy. OH WOW! THAT WAS AWESOME! My camera was in the waterproof case in Dan’s backpack so I didn’t get a pic but I’m hoping he’ll come back. We saw him again after we reached the boat. We also saw about a half dozen or so black tip sharks. None were very big but it was still awesome to see. Definitely no swimming here! LOL

We made it back to shore and then had to walk a trail that snakes along the bay here to get to the village. The village is absolutely stunning. We’re still amazed as we travel through these places at how manicured the grounds are around these villages. As we arrived in the village we saw a few people harvesting coconuts. They harvest them and then dry them for copra which is used to make coconut oil and other coconut products. It’s their big export here. The guy sitting on the ground was named Teiki. He was a pretty scary looking dude. You can tell he’s lived here his whole life. I’m guessing he’s probably about thirty or so. He is covered in Marquesan tattoos. Even half of his face is tatted up. And his hair is shaved back about halfway on his head. He has some big ol’ muscles too. His two front teeth are ground down to look like fangs and he’s got a strange look in his eyes. Of all the islanders we’ve seen, he looks most like he could be a cannibal. He was super nice but still a little scary. His wife, Kua, was very sweet. She asked if we wanted any fruit and then started taking orders from us. We ordered some mangos, pamplemouse, limes, oranges and we even asked for a coconut. I’m going to make macaroons for us. Yummy! Kau also told us to stop back by their house after our hike and she’d have some ice cold, fresh juices and ice cream for us.

We had to go out toward the beach to pay their uncle, Paul, to allow us to go to the falls. His home isn’t much but the view is amazing! They charge $10 USD per person to hike the trail. The money they collect helps their small community of Hakaui and it was completely worth it. Walking through the village and then the jungle was lovely. We even

had to cross the river a few times. The water was about knee deep but it felt amazing! It was really cold and we were really hot. Along the way we ran across ancient ruins, tikis and other unique things. We never made it to the falls as us old folks just started losing steam. Linda has issues with RA so we decided once we reached the large opening where we could see part of the falls we would go back. Even at that we hiked almost two hours into the jungle.

Back in the village we stopped at Teiki’s home where his wife, Kau, made us fresh juice. Ed, Linda & I had pamplemouse and Dan had this yummy mango drink that was thick and ice cold. It was like they froze the mango then blended it. Dan & I each had a little ice cream as well. He had coconut and I had banana mango. She makes it fresh. Their home is very traditional Marquesan. The only closed in room is the kitchen and it doesn’t have a door. It just opens to the outside. They have a huge stand alone freezer so they obvioulsy get power. Didn’t see solar panels so I’m thinking it’s hydroelectric power like the other islands. There is a roof that covers the entire place and they sleep in tiny tents on the stone floor outside. They have a large picnic table under roof and they will make dinners for you there for a price. It’s sort of like we did in Fatu Hiva. They had a grill made of half a metal drum and on it they had a pig head boiling in a pot! YUCKY! It is amazing how little these people have yet they are all so happy and smiling. The photo of Ed sitting down is “inside” of their home. I use the word inside but as you can see…inside for them is still outside. Teiki came back to the house while we were there. He and Kau speak pretty good English. He started rearranging his spear guns and I felt a little uneasy. He had four of them and there were four of us…Were they feeding us food to make us more tasty??? Of course I’m joking and they were nothing short of gracious hosts. He even made certain to tell us not to eat the fish in the next anchorage as it has ciguatera. That’s something reef fish get and is common down here. You never eat reef fish in Polynesia without talking to the locals first. Pelagic fish like tuna, wahoo and mahi are always safe and that’s what we like anyway.

Of course we paid for the drinks, fruit and ice cream. We toted a whole slew bang of fruits back to the boat. The mangos here are different than in Florida. They are really sweet and a slightly different texture. I’ve never been a mango fan but these are starting to grow on me. Don’t tell Dan because I told him I would never like them.

Last night we went to Ed & Linda’s boat for sundowners and she ended up making dinner for us as well. We had a really nice time. We do so enjoy hanging out with them. They are really good people and lots of fun!

Today we’ve been working on projects. Dan opened the coconut and got all the meat out and shredded it. I’ve dried it and tomorrow will be making macaroons. Tonight Ed & Linda are coming over here for dinner. Looking forward to another nice evening with them.

We’ll be leaving tomorrow to head north around the island. There’s another bay that is supposed to be the most awesome bay in all of the Marquesas. Well, you know, can’t pass that up.