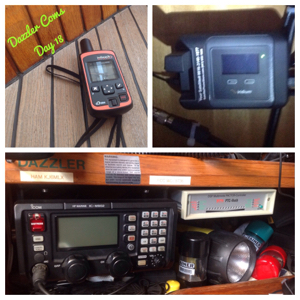 Off Grid Communication
Dazzler has been equipped with a high frequency radio for over ten years. It is an ICom model M802 with a Pactor radio modem for email communications. And for many years that is all I had to communicate. Yes, I’d use a cellular phone with a US provider or use the Telcel provider in Mexico for data, but off grid away from the Cell towers it was the reliable HF radio.
Early last year I purchased a used InReach two way texting device. It was very cumbersome to use until I studied it more and realized you could use an App on your tablet or smart phone to type the messages. It became an instant way to text with anyone and better yet with other InReach uses off grid.
We used my US based cell phone with AT&T up until the time we hauled anchor for this voyage and for the last two years it has been awesome when we are near cell towers. Before leaving Mexico, I called AT&T to have them suspend my number for now. That way I still keep my telephone number I’ve had since the late 1990’s. Once I get some reliable WiFi, we’ll port the number to Google phone until we return to the states.
Last February, I travel back to The Land of Plenty in Southern California where I purchased and setup an Iridium Go satellite communication device. I opted for the unlimited text and data plan which costs all in $167/month. I took my laptop and tablet to the store with me so that I know it would be connected properly before I walked out the door. I’d heard other stories of nightmare configuration issues and mountains of telephone time with tech support that I wanted nothing to do with. Having my equipment with me in the store probably saved hours of frustration down the road. I also didn’t want something to not work in Mexico and have to make another trip to San Diego. Don’t get me wrong, I love San Diego, but we had a journey to prepare for. We also opted for an external antenna to mount outside with clear view to the sky. The antenna does NOT come with a surface or rail mount so pick one up before installing.
While in the Satellite Store on Shelter Island in San Diego, everything seemed to be set up and the first test message was being downloaded. I swear the feeling I had must have been similar to a family in the fifties watching black and white television for the first time in the living room with the old RCA radio pushed back into the corner of the room. It was outstanding. I told the sales rep that I could believe how fast it worked. He looked at me with a funny expression and said, “We usually hear, why is it so slow!” I explained to him the way the HF radio and Pactor modem worked. I would be down loading weather for 30 minutes. Then the radio link would be lost and I’d have to start all over again. Sometimes two or four different attempts in a row to get the weather. I can tell you that even though it might be at 4800 baud rate it has been more reliable than the HF radio/Pactor modem. It is important to note that I am not in any way saying that it should replace the HF radio and Pactor modem system. I’m saying that it is great to have options. When one doesn’t want to work there are backups. And I’m not talking about Adam 12 or Starsky and Hutch.
With the Iridium Go, we are able to use a widget for Word Press that allows us to upload articles directly to our blog for your entertainment and our pleasure. Until next upload, live for the moment when retired freedom is available to you.
Cheers!
Captain Dan