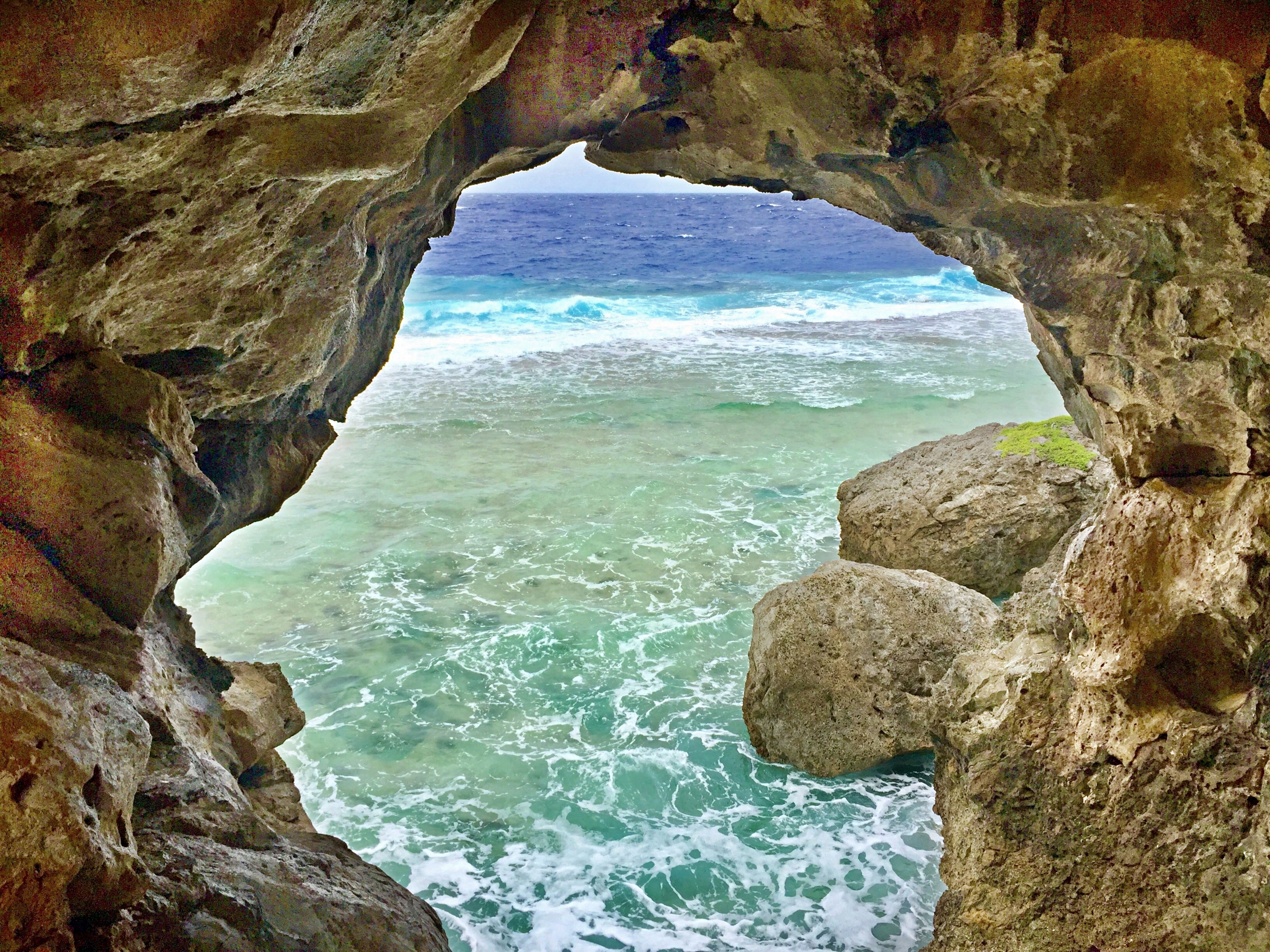 The tiny island nation of Niue is a large upraised coral atoll commonly referred to as “The Rock”. With a total land mass of just over 100 square miles and a population of around 1600 people you wouldn’t expect much to be here and you’d be right. There’s a handful of restaurants and shops, one large supermarket and just one petrol station in the entire country. But, what it lacks in some areas it more than makes up for with its stunning scenery and super friendly people. It’s like being in small town USA where everyone waves at everyone and will help you with whatever you need.

They even have a Code of Conduct list for visitors to let you know what they expect while you are visiting their country. Our personal favorite on the list is #3. Too often in our travels we run across people who complain that things are not the same as in their home country. Well, if you don’t like it don’t travel. The whole point of traveling is to experience new and different people and cultures. At least that’s why we do it.

One interesting thing about Niue is that because it’s a huge coral rock there are no beaches where you can beach your dink. Instead they have a self-service lift where you actually lift your dink up on the wharf and park it like a car. This was certainly interesting. At first it didn’t seem like such a big deal. Dan fashioned a lifting bridle and we were ready to go.

Well let me tell you this. It was not as easy as it would first appear. No, the issue wasn’t using the lift itself. It was the swell that came crashing into the reef and the wharf. If we were doing this at high tide the stairs were under water and the swell was bouncing us up and down like we were in a bounce house. Oh no, this was not for the faint at heart by any stretch. The good thing is the concrete steps had a metal grate attached so that they weren’t so slippery but still it was treacherous at best. And, no one wanted to fall in the water as we’d seen several large sharks swimming around the wharf. Fortunately we didn’t take a dip in the drink but we did hear of other cruisers who did. Of course if you came in or left during low tide it was pretty easy so after our first trip in at high tide we timed our arrival and departure at the wharf for low tide. And, we never went to town or left town after dark. No one wanted to try this at night.

We read in the compendiums and other travel guides that there is a fee for the mooring balls in the anchorage. They were particularly well kept and since the seabed here is mostly coral, using a mooring was definitely the best option. We understood that the fee gets paid to the Niue Yacht Club. Now this is where it gets interesting. Apparently a year or so ago the formal office for NYC was closed. We even had one cruiser radio us and tells us this and said because of that you don’t have to pay for the mooring. Given the great condition of these moorings we were pretty sure he was wrong and yes, he was wrong. Right on the main road in front of the wharf there is a small plaza of sorts with several restaurants and shops. There, as plain as the nose on your face, is a banner that reads, “Niue Yacht Club”. Hmmm….I guess this cruiser was either too cheap to pay or just couldn’t read the sign. Anyway, the banner was standing right outside of Gill’s Indian Restaurant so we decided to go in and inquire. Just as we expected there is still a fee for the mooring. You sign in with Harry, the owner of the restaurant. You pay for the morning when you leave but if you want a key to the showers at the wharf then you give him $5 NZD (New Zealand Dollars) and he sends you down the street to the tourism office where they give you a key. The rate for the mooring was $20 NZD per day and was well worth it.

Since they don’t have buses or other public transportation we rented a car for the week we stayed in Niue. This allowed us to travel around the island and explore. In order to rent a car in Niue you actually have to get a Niue Driver’s License. It’s not really a big deal and it’s more of a keepsake than anything else. You go to the police station and pay a fee. They take your picture and pop out a license. Of course with Dan’s background he always likes to chat with his fellow brothers and sisters in law enforcement. The young man that we met that day was very nice and Dan asked if we could bring back a CHP patch to trade with him. He agreed so several days later we returned. The funny thing is that they didn’t have a spare Niue PD patch in the station so what did they do? They actually got out a pair of scissors and cut a patch off of an existing police uniform! It was awesome! Dan’s Niue patch still has the blue edge of the shirt on it.

A funny side note here is that in Niue they have a very tiny jail located outside of town near the grocery store and golf course. Yes, they actually have a golf course on this tiny island. Anyway, we heard a rumor that the jail currently has one prisoner and get this, they let him play golf every day! When we went to the station to exchange patches I asked about this and the officer confirmed it.  I decided if I ever have to go to jail this is where I want to be.

One of the highlights of our trip to Niue was meeting Rupina of the Kololi Motel. She’s a friend of our Kiwi friends, Sean & Donna. They told us we just had to look her up. Rupina is an absolute sweetheart! She even allowed us to do laundry at her hotel and when we weren’t back before it started to rain she took it all off the line and threw it in her personal dryer at her house. And if that wasn’t enough she sent us away with a huge bag of fruits and vegetables and a pareo for Jilly. Yes, she’s amazing so if you’re ever in Niue and need a place to stay don’t look anywhere else. Go to the Kololi Motel!

Much to our delight our dear friends Lutz and Gabi of SV SuAn arrived in Niue a day after we did. It’s aways such a nice thing to meet up with friends along the way. The four of us spent a great deal of time together. Since we had a car we explored the island, found great lunch spots and just generally played tourists. By the way, if you like a good fish and chips then this is THE place to get it. It’s the only thing I ate when we ate out. Here they make it with fresh caught Wahoo and let me tell you, it was AMAZING!!! Haven’t had better even in the UK.

They have these things called Sea Tracks. Sea Tracks are paths that lead to interesting spots on the island. Some take you on beautiful hikes through the woods and others are sandy paths that lead to the beach. All of them lead to something worthwhile to see. Perhaps my favorite spot was the Limu Pools. What a beautiful place to view the ocean.

One afternoon while sitting in the cockpit I looked out and saw a mama humpback whale with her calf playing in the anchorage about a quarter of a mile from Dazzler. Niue is known to be a spot with lots of humpback whale activity and we had seen some in the distance a few days earlier but this was a real treat. I made a cocktail and sat in the cockpit for almost three hours just watching the two of them. It was a fabulous show and it was one of the highlights of our stay here.

We spent a week in Niue and it is definitely one of our favorite spots in the South Pacific. Like I said in the beginning, there’s not a lot here in the way of restaurants and shops but the landscape is simply spectacular and the people are too!

We put together a short video so you can see more of this amazing place. Click on the photo below to be taken to our YouTube Channel where you can watch “The Rock” as well as other videos from our travels.