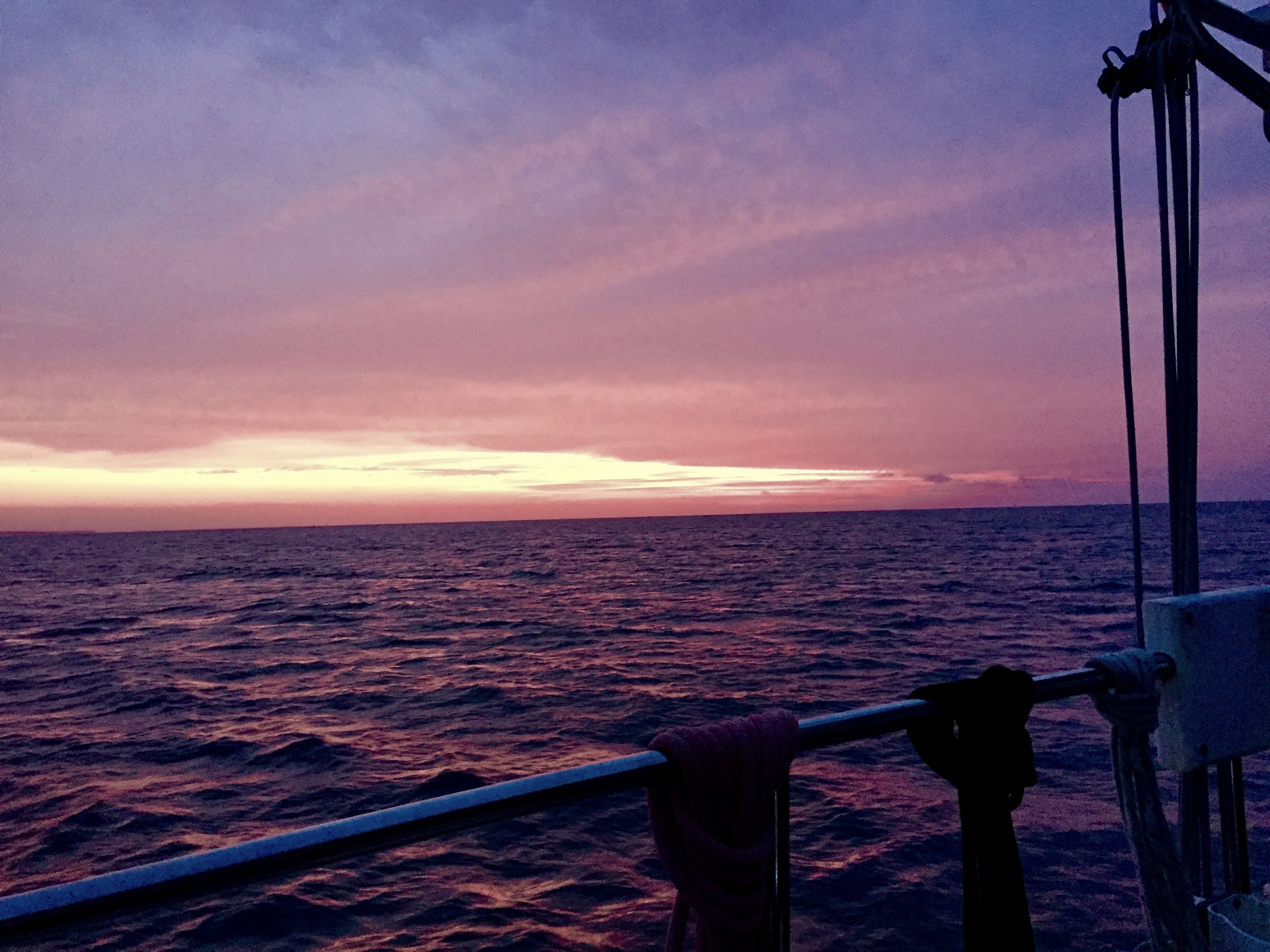 We left Mounu in the wee morning hours to head to Lifuka in the Ha’apai Group of islands here in Tonga. We arrived late in the afternoon under the cover of clouds and mist. It’s not the ideal way to enter a new anchorage but we did get just enough light to be able to see the bommies under the surface.

The following morning we headed to shore to do our official check in with the authorities. In Tonga you must check in with each island group even though you’ve officially checked into the country at your first port of call.

Once on shore we start to seek out the appropriate office for checking in. This turned out to be a bit of a challenge. One person says “go here” and another says “go there”. Ironically enough we stopped at the police station and were told to go to the building next door. When we got there they told us the office had moved. How is it that on an island of less than 3000 people the police don’t know where the immigration office is located??? Well, it turns out that the office had just moved to their new location the day before so I guess we’ll give the officer a break.

The key to handling the difficulties you experience in these third world countries is patience. We obviously wanted to get our check in done expeditiously but we also got a great tour of the village as we walked from place to place so we just tried to enjoy the adventure. Once we found the office we checked in and out at the same time. We didn’t plan to spend any time here in Lifuka as we are trying to work our way south to Nuku’alofa to prepare for our jump to New Zealand.

After checking in it was time to find some grub. The sweet young man who checked us in needed to make a copy of our paperwork and since the office was not yet set up with a copy machine he had to go back to the other city offices. He offered to drive us there and then to wherever we wanted to go. Once the copy was made he dropped us off at a restaurant we’d heard of from the cruiser guides. We went to the Mariner’s Cafe.

As with most of the little restaurants in the islands it’s not much to look at but it certainly has character. We sat at a table near the street and chatted for a bit. Across from us sat two Tongan men wearing their traditional Tongan garb that includes the taʻovala (woven mat that is worn around the waist). Before long we had struck up a conversation with them.

Davita and Kenny work for the Tongan Commission. Once they learned Dan was a retired officer we started a rather lengthy discussion. They talked of the problems Tongans face with drugs and crime. Yep…even in remote islands such as this drugs are a problem. ICE, methamphetamines, is their biggest issue. Apparently in the outer islands such as this one it’s not too bad but on the “big island” of Tongatapu it’s becoming a huge problem. How does this become a problem all the way out here??? The Internet! Since the internet has hit the islands the kids learn of all the things they don’t have but want. How can they get money to buy these kinds of things? Selling drugs. How to they learn the “recipe” to make crystal meth? The internet. It’s just unbelievable. And, the worst of it is that there are few jobs in these islands so the kids are sitting there with nothing to do so they form small gangs. It’s really very sad. It reminds me of an old saying, “Idle hands are the devil’s workshop.”

Anyway, we had a wonderful conversation with Kenny & Davita. They gave us a gentle warning to be sure we keep everything locked up tightly in Nuku’Alofa as things disappear rather quickly there. We told them our plan is only to check out of the country, pick up some supplies and top off fuel so we won’t be there long.

After they left we struck up a conversation with Tonu. His wife who is from Poland, owns the café. Their young son was there as well. He was another very interesting person to talk with about the area. He had a slightly different take on things but then he may have just been trying to downplay the criminal side because their business caters to tourists and cruisers.

The following morning we headed back to shore for some quick provisioning before setting off to the next anchorage. There was a Tongan Navy ship in the harbor. They were pretty laid back and very friendly even allowing me to snap a couple of pics.

We made our way through town from store to store as always. You can never find one store that has everything you need. It’s like hunting and gathering in the islands. Once we had everything we wanted we headed back to the boat and hauled anchor.

We motored for just about an hour and anchored down at Uoleva Island. John & Lynn of SV Danika were there and Dan knew John from Mexico. John left there a couple of years ago and has stayed in the South Pacific. On the way we saw three or four humpback whales playing. That is always such a treat.

The anchorage here is truly beautiful and there’s actually a real sand beach…not crushed coral! That’s something to find down here as most beaches are not really sand. You actually can sink up to your mid calf in this soft, squishy sand. It’s quite a bit of exercise just getting from the shore up the beach.

We only stayed here for two nights. The first evening we had dinner on shore at the Sea Change Eco Resort with Lynn & John. The food was excellent but the resort is rather odd, at least to us. It’s an eco-friendly resort. Everything is solar powered and there is no indoor plumbing. It’s like high dollar camping. Sailing is more my idea of high dollar camping! LOL! It’s definitely not the type of resort I want to pay to visit but I guess if you’re into that kind of thing this is supposed to be one of the nicest.

While we were there I had to go to the little girl’s room. Becky, our server, led me there. It’s a grass hut about 50 or 60 feet behind the restaurant. You walk down a pitch black path and all you can see is the light in the hut. Once you go in you realize you have been transported back in time. It’s a composting toilet that is seated upon a raised concrete slab just like a royal thrown. HA HA . It is two tall steps to get to the toilet. I’m not sure why but when you open the lid there is a funnel in the front section of the bowl. Honestly, I had to go so bad I could have cared less. It smelled a little but you know…when you gotta go, you gotta go. To wash your hands there is a small bottle of soap and a hanging shower bag filled with water. Yep…this was different. When we got home I told Dan I don’t ever want to stay at an Eco Friendly Resort. He assured me that will never happen! LOL

One thing that is quite disturbing for us is the way the whale watching boats get so close to these animals. In Tonga, in particular, they sell these “swim with the whales” packages for tourists. In order to get the swimmer close to the whales they zoom up really close and then drop in the swimmer. What’s even further disturbing is the fact that the Sea Change Resort goes to great lengths to sell the fact that they have virtually zero carbon footprint and are all about the environment yet they have one of the largest swim with the whales businesses. So I guess if you are eco-friendly it’s okay to molest the whales? Yeah, this is not something that sits real well with us. Had we known this we likely would not have had dinner there.

We spent two days at this little island and then decided it was time to move on. I think we’re both getting a bit antsy about getting to New Zealand. And the passage there is not for wimps. We’ve heard it can be a bit rough if you don’t get the window just right so we really want to get to Nuku’alofa and get provisioned up and ready to take the best weather window.

We really wanted to see more of the Ha’apia Group but as usual Mother Nature had her own plans. It appeared that the best time to head towards the Tongatapu Group was about to be upon us so we decided we better reevaluate our plans. Dan began studying the weather and reviewing the charts as I prepared the cabin for our next passage.