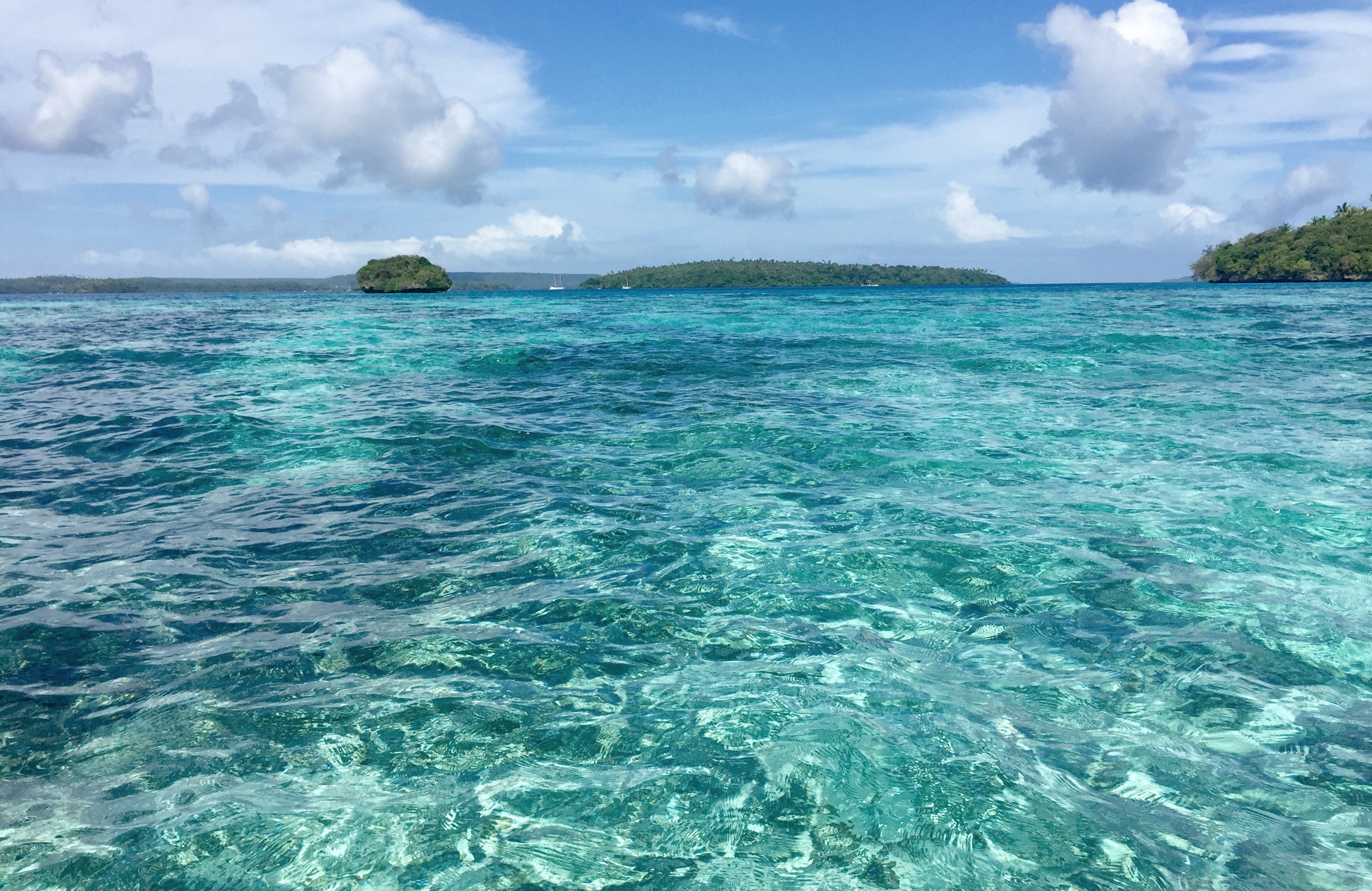 After several lovely days in the village of Mata Maka we decided to jump to another anchorage. We motored about an hour south with the hopes of stopping for a few nights at Anchorage #16. On our way there I was on the bow watching for shallow spots and I had my headset on so we could communicate. All of the sudden I turned my head and heard bang, bang, plop! My heart sank. It was the receiver for my headset. I was in a bathing suit and had it clipped onto the bottoms. Apparently that wasn’t the best spot for it as it flipped right out and landed in the drink. I was devastated! We depend upon these for excellent communication when anchoring and docking. Dan, of course, was so sweet about it even though I’m sure he was thinking a few not so nice things. LOL

Anyway, as we approached Anchorage #16 we realized it was going to be very unlikely we could get to it. The tide was out and the coral below us kept getting closer and closer to the surface as we neared the anchorage. We tried several different routes but just never felt comfortable with any of them. Even if we had been able to find a place to get through it could have been disastrous if weather came up and we had to leave quickly. Being the cautious cruisers we are we decided to go back to Anchorage #17 at Lape Island. There were a couple of mooring balls there and it was close enough to #16 that we could still dinghy to the reef.

Once again we had the anchorage all to ourselves so we sat back and enjoyed the beautiful, sunny day in paradise. We had planned to take a dingy ride around later that afternoon but soon we heard a vessel calling us on the VHF radio. Much to our delight and surprise it was our dear friends, Lutz & Gabi of SV SuAn. We left them over a week ago in Neiafu. They were heading south when they saw us on the AIS and decided to come join us. If we were going to have company we were certainly glad it was them. That evening we had sundowners and snacks on Dazzler and enjoyed some wonderful times once again.

The following morning we all decided we would dinghy over to the Japanese Coral Gardens. We’d been assured this was a most spectacular place for snorkeling. The issue is you have to hit it at the right time. You see the gardens are part of the reef that surrounds this bay so we had to wait until the tide was almost high to get over the reef. Even at that we had to drive the dingy into the oncoming surf to get to the outside.

We left a bit early that morning so we stopped at a beach just inside the reef and checked out an abandoned resort. It look like it would have been a lovely place if they had kept it going. Apparently the builder started it and then took the investor’s money and fled. Such a shame to see how devious and evil people can be over money.

After exploring the ruins we left there and went to another spot to snorkel a bit while we waited for the perfect time to cross the reef. This spot was very beautiful and the reef seemed to be very healthy. The water was shallow and warm and we saw lots of beautiful things. One of my favorites is the purple-blue colored starfish called the Blue Sea Star. You see them all over down here. Dan spotted these amazing giant sea stars called the Cushion Star. And, he found a beautiful cone snail shell that he brought up to me in the dinghy. He told me to only handle it by the sides because if the animal was still inside it is highly poisonous. I’m just curious, when my man hands me a highly poisonous shell in the middle of nowhere, should I be concerned? Needless to say we deposited this little creature of terror back into the sea because I wasn’t taking any chances that the critter might still be inside. I will say, however, that it was an exceptionally beautiful shell so I had to get a picture of it before we sent it home again.

Several hours into our day the time was finally right to make our attempt to exit the reef. Yes, this is when you hold your breath and hope for success. If you hit the incoming surf wrong it could flip the dinghy over and the last place you want to be thrust into the water is on top of sharp coral heads. At best you’re going to be bounced around bit. Yes, you have to time the exit just right.

We sat in our dinghies and watched and waited until it looked like the timing would work. Lutz & Gabi went first and while they launched in the air a couple of times we watched as they reached the other side. Now it was our turn. I was holding my breath and of course, the Go Pro. After all we had to have video of this. Off we went. The first wave was a bit bumpy but no all that bad but then we saw the next one coming. This time we launched into the air and when we came down we heard the prop hit a piece of coral. Forntuately Dan was smart enough to release the motor lock so the motor would come up if it hit anything. That lessened the impact on it. After a couple more waves we reached the outside of the reef. SUCCESS!

By this time in the day I was pretty tired and my feet were swollen and hurting due to the four broken toes I sustained a couple of weeks earlier in Neiafu. I told Dan I’d stay with the dink while they snorkeled. I did say that if it was as amazing as everyone said then I’d get in. Within a minute of him being in the water he came up and told me I HAD to see this.

I donned my mask, snorkel and fins and slid over the side of Sparkle (our dinghy). WHOA! This is some really, really cold water! It almost took my breath away but within a moment I was looking down at the most beautiful underwater scenery I’ve ever experienced! There was just about every type, shape and color of coral you could ever see all in one place. Colorful fish were swimming in and out of the coral and I was in awe! I was so excited about what I was seeing that I completely forgot how cold it was or how much my feet hurt. The only difficult part of the snorkeling was making sure you didn’t get caught up in the surf. If you got too close to the reef the waves would push you right into it and we all know that wouldn’t feel too good.

We played there in the water as long as we could but eventually the cold did start to get to us so we got back in the dinghy. Fortunately it didn’t take long for the bright sunshine to warm us up. Now, we had to get back over the reef. The return trip wasn’t as bad because this time we were just surfing the wave. It was still a bit unsettling but we made it.

The rest of the afternoon we enjoyed in the cockpit of Dazzler having a few cold beers and discussing the sights of the day. One thing for sure is that the Japanese Coral Gardens are not to be missed if you ever get to this part of the world.