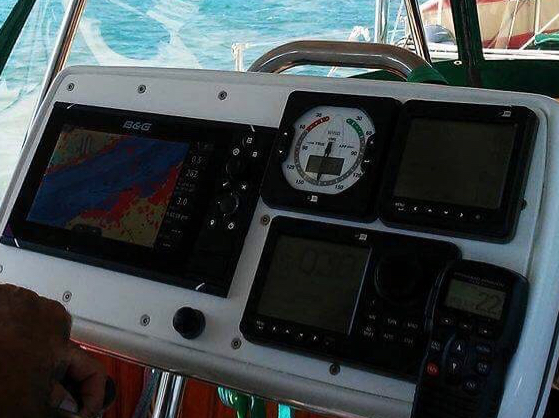 As I said recently, most days include a boat project or two and very few projects are completed in the estimated timeframe. If we think it will take two hours, it will likely take three or four and some can take days. That’s just part of boat work.

You never know what you are going to find once you get into a project. It could be corroded parts, loose wires, software issues or worse yet, the company you ordered your parts from sent you the wrong thing. We just replaced the main seal on the transmission and the dampening plate we picked up in San Diego was not the right one. Here we were several hours into the repair down in Mexico and we had the wrong part. Fortunately we didn’t need to replace it at that time so we put the old one back in until we can return it and get the correct part.

Sometimes you have to use your best MacGyver skills. We were replacing the water pump….another part bought from the same company, and the gasket they sent was incorrect as well. Thank God my man knows his way around engines and tools. I swear there is nothing he can’t fix. He created his own gasket and we were back in business. The thing is it’s things like this that add time to even the simplest of projects.

This week we got a new B & G chart plotter. Aside from having to modify the navigation pod to make the new plotter fit, this should have been a routine installation. You know change out a few wires, upgrade some software, a little minor programming and BAM, back in business. Yeah, not so much. We have now been four days working on our little addition.

The modification to the nav pod went swimmingly. Wiring the new plotter…a piece of cake. Upgrade the software…easy as pie. Then it came time to set it up. Power up and whammo, our radar wasn’t showing up all of the sudden. It worked perfectly just a couple of days ago. We didn’t change any wiring for the radar. All Dan did was upgrade the software.

This is when the real work started. Diagnosing the problem took three days, multiple calls to Navico, a few trips up the mast, borrowing parts and diagnostic tools from my cousin, wiring changes and a whole lot of frustration. All along we’ve been certain it was a software issue but of course the manufacturer claimed it was anything and everything else. Today after a final call to Navico where we were told either we have a bad radar scanner or a ghost (seriously…he said that…I heard him!), we resolved ourselves to the fact that we would have to send the radar scanner to them for repair and go without a radar for a month or so. This would require not one, but two trips back to the states because while they fix the scanner in Ensenada, Mexico you have to ship the item from the states via their shipper. Once it’s fixed they ship it back to the states. Yeah, don’t get me started on this….we will save that for another day and time! As my man always says…”Nothing is easy in Water World!”

Dan decided to upgrade the software to the auto pilot. Following their directions to the letter, he completed the upgrade. Guess what? Now the autopilot disappeared! Hmmmm….software glitch is seeming more and more likely. Then he uninstalled and reinstalled it again and you won’t believe it…the radar came back up and is running just fine. Of course now we have to get the autopilot going again.

Our original plan was to leave today to head north with my cousins, Dan and Nancy of SV Karvi but like I said, you just can’t count on things happening in the timeframe you have planned. Dan is up there working on the software issue as I write this entry. His frustration level is at an all time high but I give him major credit for remaining cool and calm. After all, I’ve known some boaters in my life who would have already thrown the thing overboard by now. Let’s just hope my guy gets this resolved quickly so we can put this fun behind us.

Of course, I’m the one who always looks at the bright side of things so I’ll leave you with this. Over the past four days I’ve learned a lot about boat wiring, navigation software, tools and more. Dan, through his extensive diagnostics has learned that all of the wiring between the nav pod and the radar is perfecto and that his instincts regarding this being a software issue were dead on. And we’ve been blessed to be able to do this in paradise and without the pressure of time constraints. So, I guess it’s not all that bad in the whole scheme of things.

I’ll keep you posted on the status of this repair…

Until the next time,