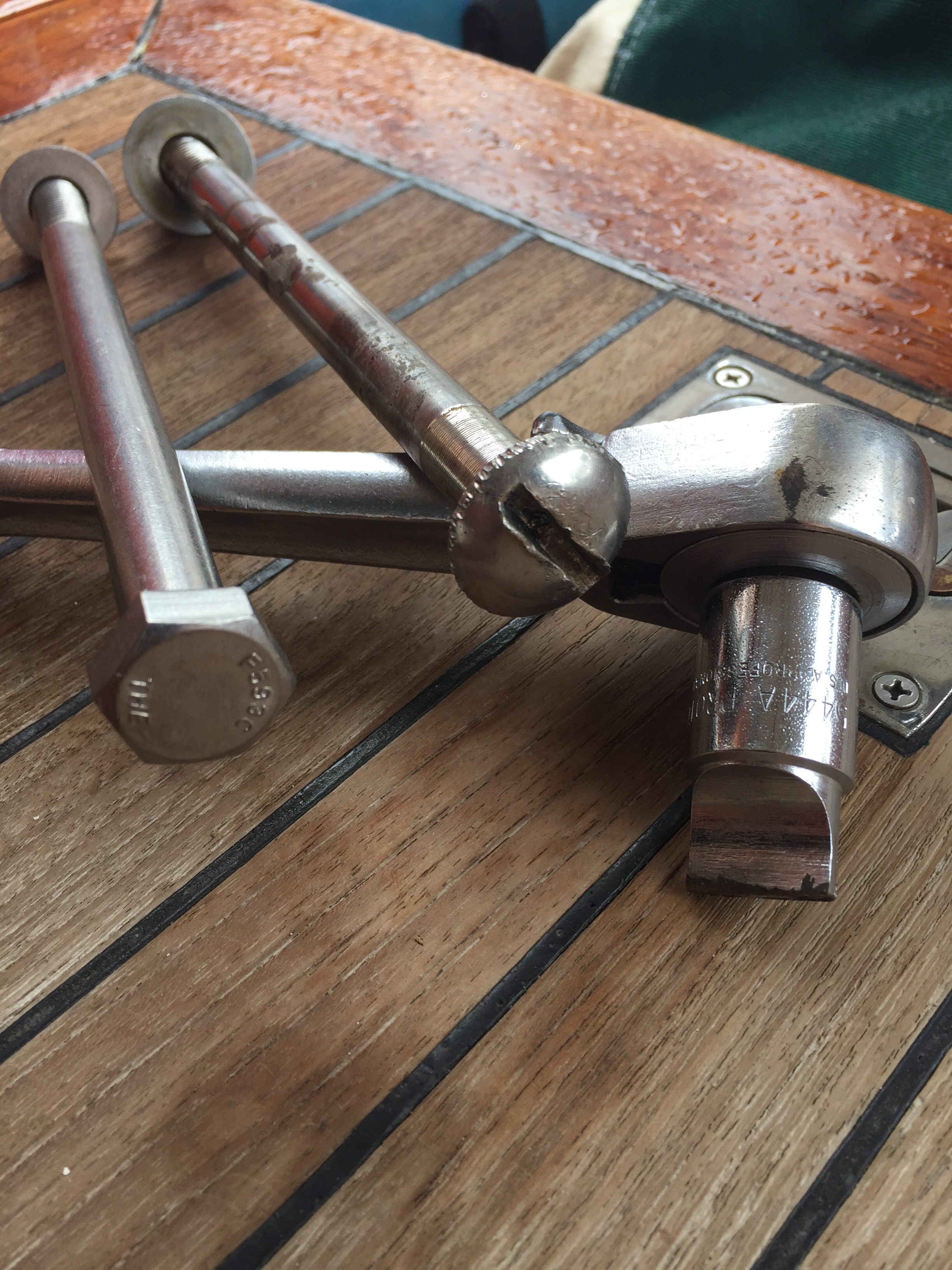 December is that time of year that many of you are thinking of how you will spend the holidays and the Dazzler crew is no exception. Our holiday is consisting of getting the larger projects onboard checked off the TO DO list in preparation for crossing the Pacific Ocean to the South Pacific in March of 2018. The list is long and distinguished. First up was beefing up the bulkhead for the auto pilot hydraulic ram.

There is now two inches of marine plywood, penetrating epoxy applied and painted and two quarter inch pieces of stainless steel plate that form the base plate for the hydraulic ram. That should handle any loads just fine.

Next up, the job of removing Dazzler’s bowsprit. Why do you remove what looks like a perfectly good bowsprit? I could say because it’s there, but the reality is that I removed it about ten years ago to repair a small area of wood rot. Then I repainted it and re-installed it. Two thoughts have gone through my mind in preparing for our upcoming crossing. Is Dazzler’s bowsprit sound? Should I decommission and disassemble her bow rigging to check and be sure?

I first used a hammer with a plastic head to sound the bowsprit. Everything sounded fine except for a small area aft of the windlass. Knowing the history of Dazzler’s bowsprit, I didn’t want to take any chances. So, the decision was made to remove it for closer inspection and repainting. Okay, I was going to repaint it anyway, but removing it makes the job easier and the results will look much nicer and we will have peace of mind knowing if there are any gremlins in the bowsprit.

First, we have to strip all the rigging and hardware off the bowsprit. When you first look at this kind of job your thought might be, “There isn’t too much to take off.” Ha ha ha! There is a lot more than meets the eye. Just saying. Before stripping anything, both the staysail and jib sail were removed and then the standing rigging had to be detuned.

Next up was removing the roller furling gear, bob stay and whisker stays. Dazzler’s bow pulpit and deck boards that are bolted down to the top of the bowsprit were next. There is a stainless strap forward of the windlass and an integrated stainless steel strap and Sampson post aft of the windlass. Both straps saddle the bowsprit and are through bolted to the foredeck. Dazzler is equipped with a Lighthouse windlass that has a vertical shaft that passes through the middle of the beam and deck and into the anchor locker where it’s motor is mounted to the bottom of the shaft. The strap bolts and motor must be disconnected before the sprit can be removed.

Boats built in Taiwan in the seventies and eighties had a special style head on the fasteners that look like a large slot. Although it has a great finished look, those slotted heads are very difficult to get a wrench on to remove them. One of these said bolts 5/8″ in diameter and about 12″ long also passes through the bowsprit and deck to help index the sprit. Several years ago I bought a ½” drive socket that had a wide screwdriver bit on top. This was the best solution that I could find for removing these types of bolts. On a side note, these types of bolts have proven to be very difficult to remove without first removing skin from your knuckles. Trust me, I know. Additionally, these style fasteners are difficult to get enough torque to turn them even with the ½” ratchet and screwdriver socket. I had to result to using a pair of vise grip style pliers to remove the bolt. A new hex head bolt has been obtained for replacement.

When I re-installed Dazzler’s sprit in 2007, I put a layer of calking on the deck under it to help keep water from settling under it and thus keeping the area between the sprit and deck drier. This trick seemed to work, but added a level of difficulty in removing the sprit from the deck. I used a halyard tied around the sprit near the stem of the bow to assist in lifting it from its bedded position. Using the halyard and mast wench worked like a champ for lifting the bowsprit from the bedding compound.

After Dazzler’s bowsprit was removed, the job of cleaning all of the bow hardware and fasteners began. Along with sanding paint off the sprit to inspect for any hidden damage. I was very pleased to find that the bowsprit was sound and had no visible signs of rot or damaged areas.

The resting bowsprit. Notice the discoloration from the metal straps and fasteners. It will all cleanup nicely.

Just one of the many containers of cleaned fasteners.

Dazzler, like many cruising boats, is equipped with a small chandlery onboard as well as all the supplies needed to complete the painting project. In 2007, when I first removed the bowsprit, I used Awlgrip paint. 10 years of wear and use for a paint is a reasonable expectation. In 2013, I removed Dazzler’s teak decks and repainted her decks with Alexseal paint. I chose Alexseal based on recommendations from Dan at San Diego Marine Exchange (SDME). Dan had worked for many years as a boat finish painter and was a wealth of tips, tricks and advise. I have been very happy with those results as well. Alexseal, like Awlgrip, is a linear polyurethane blend of paint. Both are very durable and require mixing two to three components before painting. Yes, a can of Easypoxy would be easier to apply, but ten years of durable use and looking good speak for themselves. The initial cost is more expensive compared to other paints like Easypoxy. With all the work involved removing the bowsprit, I figured my initial investment for a ten-year yield is worth it. Additionally the painted surface is very durable and forgiving to small dings, which will happen.

That’s it for now. I have to get back to working on the bowsprit, so we can keep moving forward in passage preparations. I’ll be putting together part two after this job is done. Where is that tube of Neosporine?