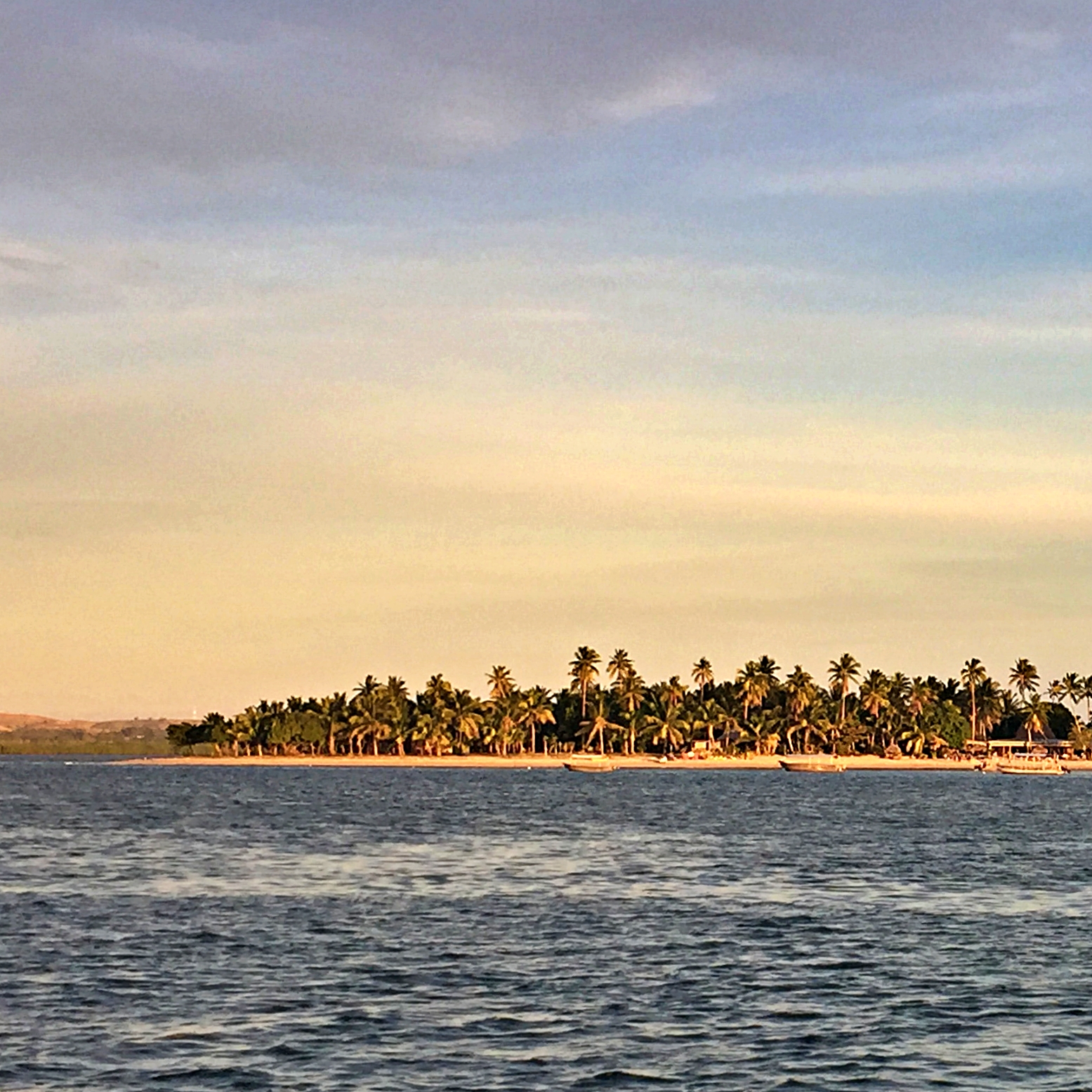 A friend and follower checked in on us because it’s bee three weeks since our last entry. It’s nice to know we have people out there who think about us. Thanks Jim! Turns out there is so much to do here in Fiji we are having a hard time finding any free time to write or create videos. But we do have a treat here and another one that is scheduled to go up later this week.

As you know we’ve crossed over from Vanua Levu to Viti Levu and there’s a lot of really nice stuff here. Along the way we stopped in Suva, the Capital of Fiji. It was just a one night stop to get some provisions. We’d heard there is a Cost-U-Less there. This is a store sort of like Costco in the states but it is not nearly as good as the Costlo we found in Tonga. We were actually pretty disappointed as we didn’t really find anything we were hoping to find. The only bonus was that we did find Blue Diamond Smoked Almonds. It’s been a very long time since we’ve had this treat. YUMMY!

Suva is a big city relatively speaking and it was very hectic. The port there was just filled with commercial ships and all sorts of vessels coming and going at all hours of the day and night. We anchored just off the shore near the Suva Yacht Club. The water here is green, murky and not very attractive. It’s definitely not a place you want to spend much time so we bolted the moment our provisioning was complete.

From there we made an overnight stop near the Pearl Resort and Marina. We didn’t even go into shore because it was late in the afternoon when we arrived and the wind was howling. The following day we headed to a magical place called Robinson Crusoe Island. It’s a very cool place to visit. There’s a huge barrier reef that surrounds the bay where this little island is located. Getting through it is, like always, a bit unsettling. After all, there’s this giant ocean thousands of feet deep and it’s pushing itself into the shallow bay. The big rolling waves come crashing over the reef making it a bit rocky on Dazzler. As usual Captain Dan threads the needle perfectly and we come out on the inside of the reef where we are greeted by a most beautiful sight.

It is early afternoon as we drop the hook. The sun is bright and the sky is clear and the tall green palms are swaying in the tradewinds. Yes, this is going to be a great place to hang out for a couple of days.

With our anchor set and the dinghy motor on we head to shore and we are not at all disappointed. It costs $10 FJD per person to go ashore. We pay it only when we arrive and don’t have to pay again unless we leave the anchorage and come back. Turns out, that’s a bargain to have access to this little gem.Of course we could just tell you about it but better yet….we can show you so check out the link at the bottom of this article for a short video tour of the resort. And make sure you check back later this week to see the video of the Island Dinner Show we attended one evening. It was a fantastic show that included fire walking and eating as well as some spectacular island dancing.

We ended up spending three days here and are delighted we did. This is an unforgettable island full of great people. Oh, well I guess there’s another reason this place is so unforgettable. The day we were leaving we bumped the reef with Dazzler. Yes, it finally happened. We’ve been told over and over again that it’s virtually impossible to sail the South Pacific and not hit the reef at least once. They all tell you… “everyone does it sooner or later so just be prepared and hope it’s not too bad.” Well let me tell you something. Knowing that “everyone” does it sooner or later doesn’t make it any less stressful when it finally happens.

We were making our way through the pass that morning and Dan had Dazzler on the line we used coming in. I was on the bow and told him I thought we were a little too close to the right side of the channel. He was listening but was looking at the plotter and was on that line from our entrance so he thought I was being a little overly cautious. He did start moving more port anyway but all of the sudden we went from 10 meters of water to less than 2 meters and as Dazzler came down from the swell we heard the sound no sailor ever wants to hear…..that thunk sound of rock against the keel. I still get sick to my stomach just thinking of it. Dan reacted as quickly as he could but the water got too shallow too quick. I was on the bowsprit and grabbed the rail to keep from going overboard. Yes, it was a bit of a jolt. We bumped two more times before we made it away from the coral. Needless to say we were both a bit shaky after that. Don’t think I’ve ever seen Dan like that and honestly I hope never to see him like that again. As a rule we do not drink underway but after this incident we were both so shaken that we did drink a beer to calm our nerves a bit.

The good news is that we did just bump on top of the coral rather than run into it at five knots. And, the better news is that we’ve checked the bottom and all that happened was a little paint was scraped off the bottom of the keel. Yes, we were lucky. We know of others who weren’t so lucky.

So the question you probably have right now is why did this happen? After all, he was traveling on the exact same line we came into the anchorage on so theoretically everything should have been just fine. Two factors played into this. The first is that the water here is very murky due to the river that feeds the bay. On the bow it was hard to see what was under us. I kept asking for depth information from Dan because I had no way to judge it. Shallow or deep the water was all that murky green color. And the second, more important factor is that we came in at high tide and were leaving at close to low tide. This channel isn’t all that wide so by just being a few feet too far to the right we were in the wrong spot. Again, it happens. You just have to pray that when it does you can react quick enough and prevent serious damage.

We are always very cautious coming into and leaving places where there are reefs and this only makes us that more cautious. It also cemented in our minds the reason we never come and go after dark. These reefs are nothing to mess with. We’ve seen too many boats that didn’t quite make it so we will continue to be uber cautious. Anyway, it’s all part of the adventure I guess.