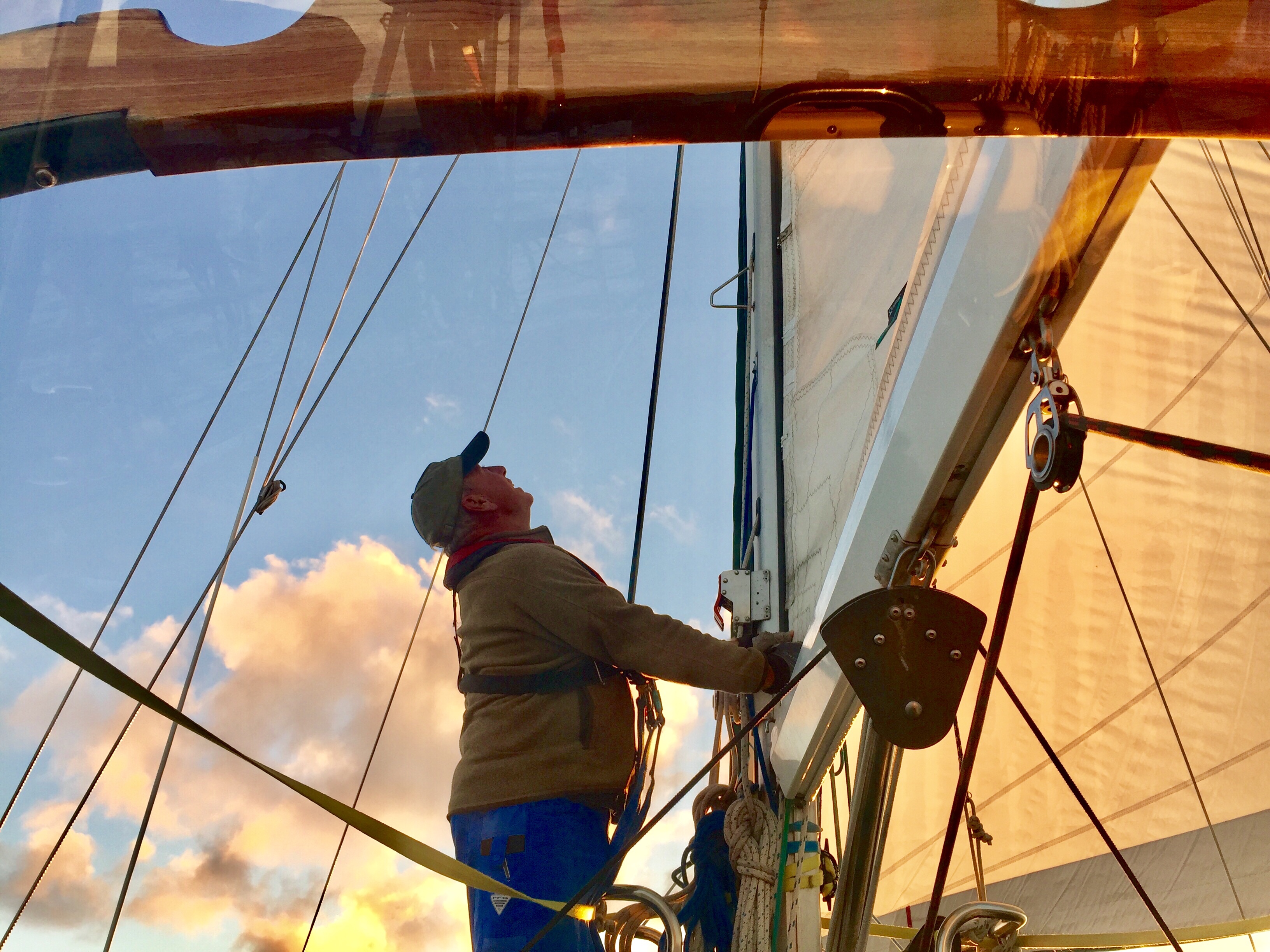 If someone ever tells you the cruising life is easy, trust me, they’ve never really done it and have no freaking clue what goes on out here! Let’s start with the fact that I awoke for my watch last night feeling like complete and total crap. My sinuses were all stopped up, nose was running and I had a headache that could stop a raging elephant in its tracks. Of course I hated the thought of going on watch but during a passage is no time to be sick. We both need our rest and I had to let Dan get his so up to the cockpit I crawled with tissues, my soda and two jackets. It’s not cold but I was feeling a bit feverish.

Two hours into my watch I had to wake Dan to do a sail change. We lost all wind and the sails were flogging. I hated to do it but it had to be done. For those hardcore female sailors out there who are questioning why I had to wake him to do the sail change, well, that’s how we do it on Dazzler. I’m perfectly okay with allowing my Captain to make the decision. Yes, I know what to do but this is an unforgiving world out here and I know that Dan has far more knowledge and skill than I. I’m not afraid or ashamed to say so.

We ended up dropping the jib and turning on the engine. There just wasn’t enough wind to keep this big ol’ beast moving and we do not sit and flounder. That’s why they made engines; so we don’t have to bob like a cork right?
I told him to sleep a half hour longer since he had to get up but all I wanted to do was crawl back in bed. After my watch I finally got to do just that and I slept for four straight hours.

I woke up still feeling crappy but I figured Dan was probably ready for some more rest. He finally went down for a nap around 0930 but was back up on deck a half hour later. He wanted to get us back sailing again so we could turn off the engine. I was sitting in the cockpit when I saw him pushing the spinnaker sail out of the doorway. “Oh hell no! Please, let’s not do this now.” I’m thinking to myself. Don’t get me wrong, I love to fly the spinnaker…when I’m feeling good; but it’s a lot of work to put this massive sail into action and I just wasn’t feeling it today. Dan knew what I was thinking and promised to do most of the work. Even at that it’s a bitch! This thing is 1300 sq. ft. It’s 350 sq. ft. BIGGER than my last two bedroom apartment!

Of course there was no talking him out of it so up on deck we went. A half hour later she was flying and I was headed below. I sat around the table and fell back asleep for another couple of hours. Little did I know at the time but flying the spinnaker quite possibly prevented a major disaster aboard our beloved Dazzler.

After my nap Dan finally went down for a couple of hours. By the time he got up it was time for the net and after that, time to douse the spinnaker for the evening. We never fly her at night. It was about 1630 when we went on deck to start taking her down. It was a bit tougher than normal as the winds had kicked up but we finally got her on deck. I was standing at the mast pulpit awaiting my next order from the Captain when I saw something that didn’t look right. Dan has me trained to always be on the lookout for something unusual or out of place. This was definitely unusual! I waited until he was done getting the sail tied on top of the dink and then asked him to come take a look.

The gooseneck, which is the large metal bracket that attaches the boom to the mast, was separating from the mast. It is riveted in place and several of the rivets on the starboard side had pulled out. This could be very, very bad! The last thing on earth you want is to be flying the mainsail and have the boom separate and start thrashing side to side. It would be like an flying 16’ metal battering ram destroying anyone or anything in its path. No, not a good thing at all! Of course you know Dan, he has all the tools and parts to fix it so off he goes below to get his bag of tricks. And, score one for Jilly for recognizing a potentially dangerous issue!

We got the starboard side rivets out and replaced and then moved on to the port side. Uh oh! The ones on the port side pulled out completely with the pressure of the others being tightened. I say a little prayer as he sets about trying to get this massive boom positioned so he can put the rivets in on the port side. Before he can do that he has to get the gooseneck up flush to the mast…much easier said than done. Keep in mind we are doing this on a boat that is bouncing up and down in 2 meter swells with 10-15 knots of wind. Working on a moving platform is always tricky. Tools are sliding around and constantly having to be corralled. I felt like the great cat herder out there on deck. Just when I got the drill secure a punch starts to roll away and then a wrench starts to wander off. It’s a never ending battle that gets harder as the swells get larger and the wind picks up.

As Dan’s moving the boom around trying to get it in place I’m standing on the portside deck. All of the sudden I heard the creak of metal and then a snap. All of the newly installed rivets on the starboard side broke loose and now the boom is literally dangling in mid air held only by the mainsail and the lines that keep it attached to the deck. “Holy mother of God!” I blurt out. I’m sure the look on my face was priceless. I probably looked like one of those cartoons with my eyes popping out as my jaw bounces to the deck and back up causing the top of my head to shoot into the air. You know how I talk about the sphincter factor when we cruise through the reefs? Well let me tell you…it shot immediately to raging red, ultra tight mode in about a millisecond. Dan, however, was cool as an a mountain breeze as he stood there looking at this like he expected it to happen. Of course I’m certain that it was all for my benefit. You know, keep the little woman calm. He studies the situation for a moment then heads below to get more tools as I’m watching nightfall approach while saying more prayers.
As he’s working on the gooseneck he figures out what caused the problem. The gooseneck had seized up and was no longer swinging side to side so each time the boom made a swing it was just pulling at the bracket and the rivets. Okay, so now he has to fix this before he can attach it again. This turns out to be a much bigger issue to deal with but with perseverance and a big hammer he gets it moving again. Now we have to get the boom in place. We had to move it from its original location on the mast because the rivet holes had become enlarged so we used a halyard to pull the boom up a little higher and hold it in place. Dan drills the new holes and just as it’s getting dark he’s able to put the new rivets into the gooseneck.

Two hours after I pointed out this issue we get all the tools put away and I’m suggesting that we don’t put up the sail tonight…just motor until morning so we have light when we test it. Dan won’t have it. “I have to have faith in my work” he says as he heads out to hoist the mainsail. More prayers are said on my end. The good news is that was over six hours ago and all is still good. Once again I say….there is NOTHING my man can’t fix!

Oh yeah…the rivet tool he used to put those beauties into the mast…more than once I’ve looked at it and thought to myself…why in the heck do we need this? He’s never used it and it’s just taking up valuable room I could use for shoes. Well now I’ve seen why we have it and honestly, I think I have enough shoes!

So, here I am back on watch. I’m still not 100% but getting better. I’ve thanked God for the blessings of today and I can’t help but think how us putting up that spinnaker put me in the right place to see this potentially disastrous problem. Thank you God!

Until next time,
Jilly & Dan