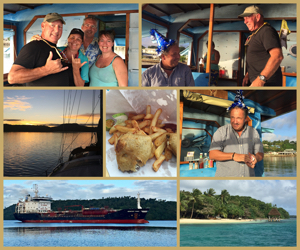 We spent a couple of nights at Port Maurelle then decided it was time to head north toward Neiafu again to provision. Our plan was to spend a night at Lotuma and have dinner at the Tongan Beach Resort which is just about thirty minutes south of Neiafu and only about forty-five minutes from Port Maurelle.
It was a beautiful day and we dropped our mooring and headed out. Since it was such a short trip and on the inside of the islands we just motored and didn’t even load Sparkle on deck. The ride to Lotuma was lovely. There was lots of marine traffic on the waterway. We saw fishing boats, large ships and cruisers. We pulled up outside of the resort and secured a mooring ball.
After our ceremonial anchor down beers we hopped in the dink and headed to shore. There were several men on the dock placing new palm fronds on the hut at the end of the dock and many workers moving about but we didn’t see any guests. We tied up the dink and walked through the outdoor restaurant where we saw one man sitting at a table. He introduced himself and let us know the resort is currently closed. Well that was a bummer. We’d heard they have great food and were really looking forward to eating there. Guess that’s all part of beating the crowds.
Since we weren’t going to be able to have dinner there we decided to head back to Neiafu so we went back to the dink, hauled the anchor and moved north. Once back in the village we went ashore to get some provisions and then stopped back by the Hideaway for another fish and chips fix. Just can’t seem to get enough of those.
We had a lovely afternoon on the barge. Met a few other boaters there. One is a guy named Ken. He’s a Brit. It was his birthday and he was quite a hoot. He’s a magician and he spent the better part of the afternoon regaling us with his tricks. Actually, he was quite good. Even Dan, who is a master at spotting things was unable to figure out a couple of his tricks. We had a great time getting to know him.
Of course after a couple of days here we were ready to get moving again so it’s off to the east side of the islands. We haven’t had a chance to explore this area yet so we’re looking forward to seeing what they have over there.
Check back to see what we find.
Until next time,
Jilly & Dan