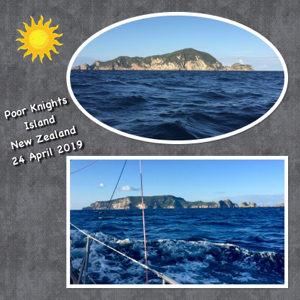 Our first day out was really spectacular. The winds were running 18-20 knots and we were making amazing time with the mainsail and jib flying. We actually starting hitting close to 8 knots which is a touch fast for Dazzler so we had to bring in some sail to slow her down a bit but we certainly enjoyed a great first day on this voyage.
We passed Poor Knights Island just before sunset. We were about 1.25 miles away. The rocky cliffs had taken on a golden hue as the glow of the afternoon sun beamed upon their jagged faces. The white foam of the ocean was beating upon the shore and it was a magnificent sight to behold.
Just after we passed the island the winds and swell started picking up so we decided we needed to put the second reef in the main and pull in the jib. The only sail configuration that requires someone to go on deck is when we are putting in or taking out a reef in the main so we try to do this stuff before dark. After all, safety first!
As is standard protocol on Dazzler, I fired the engine and took the helm and Dan started working the lines. My sole job during this event is to turn Dazzler straight into the wind and hold her there. It sounds pretty simple right? Well, if you’ve ever had to turn a 32,000 pound sailboat into 20+ knots of wind in big swells you might understand it’s not as simple as you’d think. I’ve done it dozens of times but this time was different. As I turned the wheel hard port and put some throttle to it Dazzler began to make the turn but about halfway toward the point I needed to be at she just stopped. No, not the engine. She just stopped turning. I throttled up more and held hard to port but she just wasn’t budging. She got to where the swells were hitting us broadside but wouldn’t turn an inch further. We were getting knocked around a bit You and Dan was telling me to give it more throttle as he was trying to work with the sails and they were fighting him. I’m at the helm just begging Dazzler to turn.
After what seemed like an eternity we rose over a large swell and she started turning fast to port but now it was too much. Dan hollers back to tell me to turn starboard before I lose the angle but it’s too late. It’s like we’ve been slung out of a slingshot and the boom comes slamming over to the port side missing Dan’s head by inches. Of course he knew it was coming so he was watching for it but my heart is now in my throat. I’m freezing cold and now just a bit freaked out but there’s no time to think about any of that. I’ve got to get her into the wind.
At this point we’re going hard to port. I’m wresting with the wheel and throttle to bring her back and Dan is doing everything he can to get the sail down. Finally I get her into the wind but holding her there is like trying to hold the head of an anaconda snake. She’s bouncing all over the place in the choppy seas.
At last Dan yells back that he’s got the reef in place so I can turn back to our original heading. I turn to port and pour on the coal and she comes swinging around hard. Just before she reaches the intended heading I turn back starboard a bit to prevent over steering. I get her to 17° N and set the autopilot. Phew! Glad that’s over!
When Dan comes back into the cockpit I ask him what happened. He said he thinks the little bit of jib that we had out was acting as a stopper. It was holding the wind and keeping Dazzler from turning. In hindsight we should probably have furled it in completely before making the turn. Well, you can bet your britches I’ll be seeing to that next time. This ol’ gal’s heart can’t take that stuff! That was a bit too much like work.
I’m sure I signed up for the Princess Cruise. Where’s my cocktail and how do I get to the Lido deck anyway?
Until next time,
Jilly