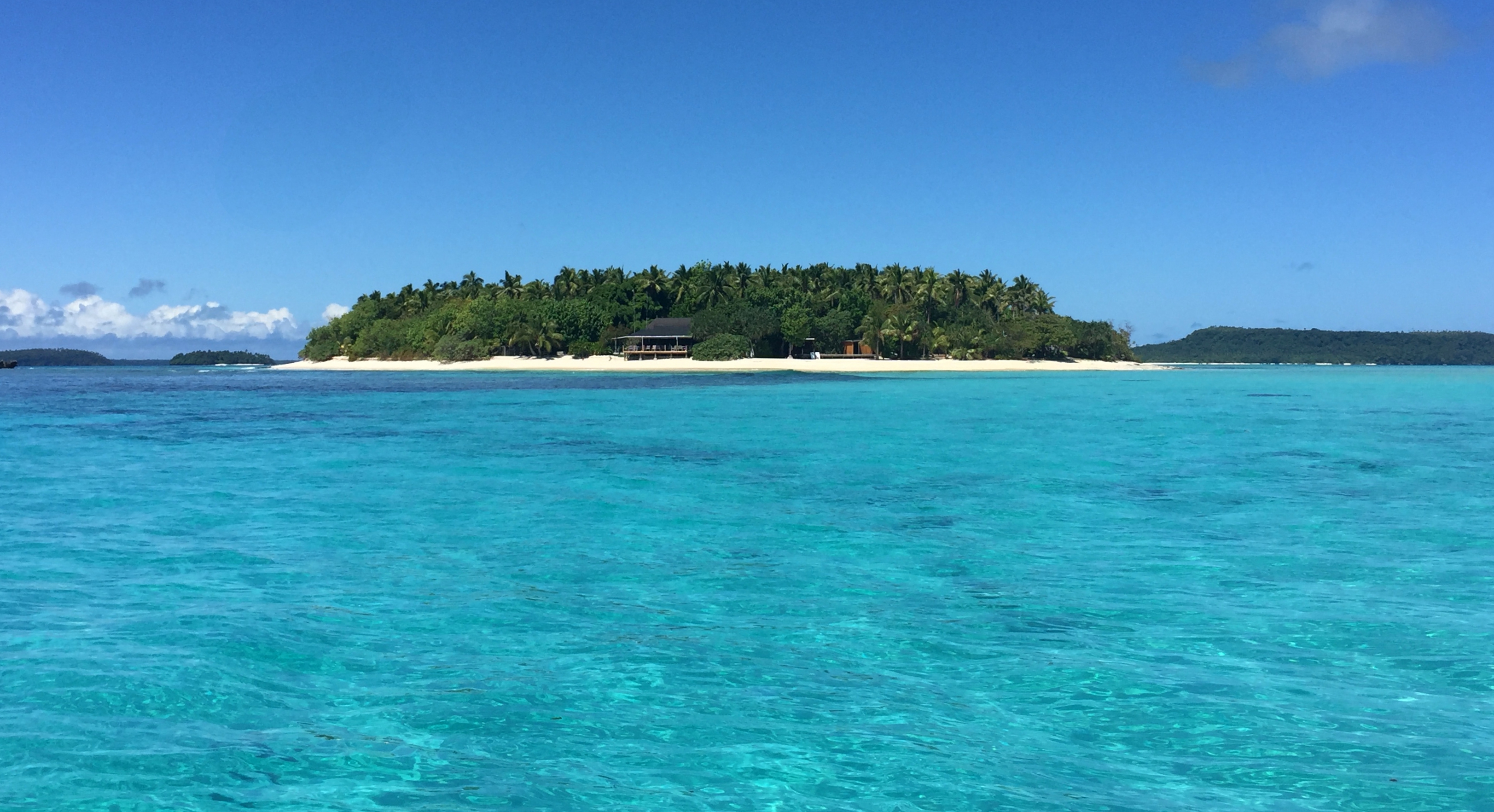 Time seems to be flying by in Tonga. Here we don’t have the issue with a short time visa rather we are working against the clock to get to New Zealand before cyclone season hits. It always seems as though there is something pushing us to move forward.

After two days at Lape Island with our friends we decided to move on. Lutz & Gabi saw a weather window and decided to make a run further south. We decided we wanted to spend a couple more days here so we headed to our next anchorage, Mounu.

As we approached the anchorage it was definitely an awe-inspiring sight to be sure. The crystal clear waters in every shade of blue and green sparkled as they lapped up against the pure white sand of the tiny island. There was only one other boat anchored here and we were immediately in love with this place.

We located the perfect spot to drop the hook and settled in for an anchor down beer. It’s not typically recommended for overnight stays as the surf can come right over the reef and make it pretty uncomfortable but the weather pattern was perfect for our stay.

Our next order of business was to call the Mounu Resort to see about getting dinner reservations. The woman who answered the radio told us they need 24 hours advance notice. She also said the bar opened at 1600. We decided we’d go ashore for sundowners and make reservations for the following evening.

In the meantime we took the dinghy and went to explore this amazing and beautiful place. It is no doubt the most beautiful anchorage we’ve been to here in Tonga. We toured all around the island and out toward the edge of the reef. Honestly, unless you’ve actually been someplace like this it is almost impossible to describe.

A little after 1600 we headed to shore for sundowners. Upon arriving at the resort we saw a young couple sitting on the deck working on their computers and chatting. We waited 15 minutes for someone to help us and finally Dan saw a book on the counter. We’ve been to honor bars before in the islands so he wrote our name in the book and tallied up two beers. We sat at a table chatting and enjoying the views.

Another ten to fifteen minutes goes by when the owner finally saunters into the bar. She tells us she’s been “playing” on the internet. That should have been our first clue that service means nothing to her. Dan explained that we had been waiting when he saw the order book and he assumed it was an honor bar so he wrote down what we had and got us two beers. She became very rude and told us, “That’s the last time you’ll ever do that.” Seriously? It wasn’t like we were trying to get something for nothing. And, if she’d have actually gotten her lazy you know what off the computer and come out to serve us we wouldn’t have seen the need to get our own beer.

I tried to ignore her attitude but she wasn’t making it easy. I asked her about making reservations for dinner the following evening. She immediately quipped back that she didn’t have any room stating she had her resort guests and the people on the other boat in the anchorage. She said 16 is the most she can handle. Hmmm….interesting given that the deck has seating for at least 24. I said, “We were told you only needed 24 hours notice when we came in today.” She got rather rude and repeated that she didn’t have room for us. Honestly we both got the idea that it wasn’t that she didn’t have room, rather she didn’t want to serve us. Being the somewhat instigator that I can be at times I pushed her a bit asking, “Well then how much notice do you really need for reservations?” She said in a very nasty tone, “I told you 24 hours.” As I turned to walk away I looked back and said, “Well, obviously that’s not true.”

Rather than get into an altercation with this wicked woman I decided the best way to handle it was to write a review on Trip Advisor and put the information here on our blog so that others traveling in the area are aware of what may occur at this resort. When I got back to the boat I went to Trip Advisor and found we aren’t the only ones who’ve experienced her severe lack of service and horrific attitude. Several others had recently written almost the same experience. I do need to add, in fairness to the Tongan people, that this woman is not Tongan. She’s not from Tonga and is only here to make a buck. The worst part is that for those who book her resort you are basically held hostage as there is no other restaurant on the island and you can only get there via boat. I read where one of her resort guests stated that they were hungry most of the time they were there. Just a little warning for others traveling in the area.

As for us, we didn’t let her attitude or lack of service change how we felt about the anchorage. The anchorage itself was amazing and we didn’t need to go on shore or spend money buying $10 beers from someone who obviously didn’t want our business. No, instead we enjoyed a fabulous steak dinner aboard Dazzler. Honestly I’m pretty sure it was far, far better than anything we would have been overcharged to eat at the resort anyway.

The following day we worked on the boat in the morning and then took the dinghy over to the neighboring island, Ovalau, to do some exploring. We had a wonderful time walking on the beach and collecting shells. There were goats on the island too. Obviously someone brought them there because they clearly didn’t swim there.

Dan took the opportunity to climb one of the swaying palms. Unfortunately I didn’t get the video of him falling on his butt when he tried to jump out! LOL. Yes, we had a terrific time here but having seen this island and having a bad experience on Mounu we decided the time had come to keep moving south so we departed the anchorage under the cover of darkness at 0300 the following morning.