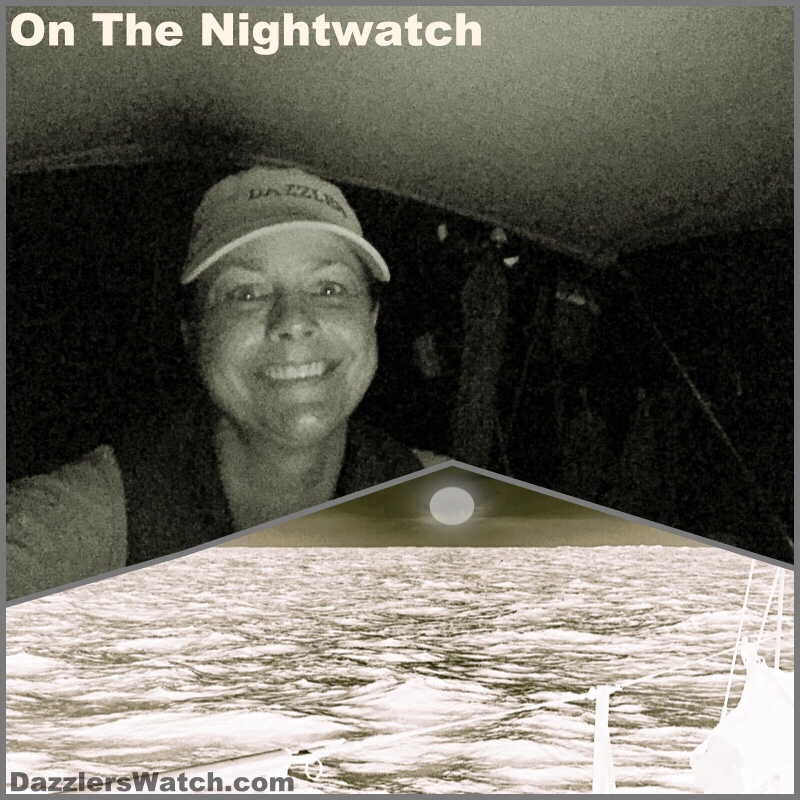 Well, we finally got the generator, finished up provisioning and set off from Nuka Hiva headed toward the Tuomotus. Our first stop…Kauehi. It’s just over 500 miles away and will take five days to get there. We are watching a mara’amu that is approaching the area. This is a southeasterly blowing tradewind that can bring sudden downpours and cooler temps. The last way we want the wind to blow on this trip is southeasterly so we are doing our best to get to Kauehi and get hunkered down before it arrives. We even left a few days earlier than we originally planned just in case the forecast is wrong and it comes earlier than expected.

So far the sailing has been nice. Maintaining a steady 5.5 knots and enjoying following seas for a wonderful ride. Tonight, however, the weather has kicked up a bit and there are squalls about. Dan’s in the cockpit and I’m headed down for my after dinner/pre-watch nap.

I know I kid a lot about calling Dan the “gallows man” when he comes to wake me up for my watch but honestly I enjoy doing watch in the middle of the night. The night sky is always so beautiful and it’s just me, the sea and Dazzler. It is very peaceful, at least most of the time anyway.

The longer I’m on the boat the more I’m learning about sailing her. Dan is teaching me so much and little by little he is giving me more responsibility when it comes to running Dazzler. I remember a year ago when we made our first overnight passage from Puerto Refugio to Puerto Peñasco in the Sea of Cortez. My only instruction was that if the wind went above 15 knots or anything at all changed I was to wake him. He didn’t even sleep in the bunk while I was on watch. He stayed in the salon where he could hear everything on deck. Well, it’s astounding what a year will do.

Slowly Dan is giving me more instructions about how to handle the sails when wind, sea state and weather changes. During the long passage from México to the Marquesas when the winds changed and sails started flogging he would just have me alter course a few degrees. After all, on a 3000+ mile passage a few degrees either way for a couple of hours didn’t make a lot of difference. Last night I employed that technique just five or ten minutes before it was time for Dan to take over because the winds kept changing. I know this is a much shorter passage but how much could it hurt for just a few minutes? Especially if it means him getting a few additional moments of much needed rest.

Tonight as I prepared to go on watch Dan gave me instructions that included trimming the jib. He told me when I should let it out, when to bring it in and how much. Of course how much is all speculative until the time actually arises.

Well, I guess Neptune and Mother Nature must have heard him and decided I should be tested. I come into the cockpit and I check all the things I usually check on the instruments, do a visual assessment of the sea, sky and Dazzler. We have about 12 knots of wind and are cruising at 5.2 knots. The sea state is fairly benign with 1 meter, long frequency rollers. Looks like this will be smooth sailing so I sit down prepared for five hours of writing and doing crosswords on my iPad.

Yes, my first hour on watch is pretty normal with winds varying between 8-12 knots. Then the winds suddenly drop to less than 5 knots and instead of hitting us dead on the beam they have clocked back to our stern quarter. Test #1…if the winds start coming from behind, let out the jib. “Okay, no problem, I’ve got this,” I say to myself. I’m letting out the sheet and watching the winds. It takes a little time for me to get it just right. I have to let it out, bring it in, let it out, but finally I have it dialed in. We’re only creeping along at 3 knots with 5 knots of wind now but my sails aren’t flogging and I haven’t had to wake Dan up so all is good for the moment. Plus, while we are trying to beat the mara’amu, we also don’t want to get to the atoll too early as we’ll just have to hove to and wait for the sun to come up to enter the pass.

We cruise along like this for ten minutes or so when I start to feel a few raindrops. They are light and not even enough for me to don my foul weather gear. I stow my iPad under the seat and just as I stand up behind the wheel I feel the winds starting to ramp up. I look at the nav pod and they are already up to 12 knots from 5 in just a matter of seconds. And, they have clocked around again and are hitting us at 60° off the port side bow. As I’m making my assessment of what is happening I realize our speed has jumped. We are surfing through the water at 6.5 knots. It’s not too fast but I do need to pull in the jib. So, back to the winch I go. As I’m pulling in the sheet the winds are increasing. I look over and see 18 knots. This time I dial it in easily but no sooner do I have everything running smoothly when the sea stops rolling and the wind drops back to 6 knots and is coming across the stern at 140°. “What the? Come on now. I just had it all perfect.” I say aloud to whoever is listening. “Okay, I’ll release the jib yet again. Are you happy now?”

It’s a bit trickier, for me anyway, to know exactly where to have the jib when the winds die. It takes me a little longer this time to get it set but I’m determined not to wake Dan so I keep at it and my determination pays off. With a little adjustment here and a little there I get her set just right. “Yes, you can do this.” I say to myself.

I turn to look at the plotter and see a pretty large squall line heading our way so I take this opportunity to go below and get my foul weather gear. I drop my iPad and my favorite chair cushion below, don my jacket and back to the cockpit I go. I’m just clipping into the jack line when the rain starts pelting me pretty hard. I take one step toward the helm and here it comes. The wind is ramping up again and this time I sense it’s going to get a bit more nautical. I look at the instruments and yep, here we go. Wind is back to 60° and in seconds it’s up to 18 knots and increasing. We are whizzing through the water and I look over to see our speed go from 6.6 to 7.5 knots! “Holy crap! I’ve got to slow this baby down!” I grab the winch and start cranking. The rain is dousing me and the water is pouring onto my head off the sunshade but there’s no time to worry about that. I look over again and we’re at 7.9 knots. “Keep cranking that winch woman.” I’m saying aloud as if someone other than me can hear. I finally get her slowed back to 6.5 knots and we’re just sailing along in the rain. This squall only lasts about fifteen minutes. As Captain Ron says, “They come on ya fast and they leave ya fast.”

Before I know it the winds have died again and are back to 120° off the stern. Here we go again. I’m going to be a pro at this before the night is over. This time, however, they don’t fall completely off, they maintain around 10 knots so we’re back to 5 knots of speed, which is comfortable. Of course I stand at the ready because now I don’t trust that it will last.

There’s a full moon out so I can get a good look at the sky and clouds and between that and the radar I decide the squalls are probably gone for a while so I go below, grab my iPad and get back to normal only now I’m writing to you about my watch instead of working my crossword puzzle. And, as I sit here looking out over the vast ocean I can’t help thinking of my dad. I’m sure he’d be so happy to see me out here doing something he so loved to do. I sure do miss him.

On a side note: There’s something so eerie when the sea state just suddenly calms down and the winds stop…especially at night. Sometimes it makes me think of a scary pirate movie where all hell is breaking loose and then everything stops. The pirates start looking around and it’s just at that moment when the giant octopus comes out of the water and starts attacking their ship. Men are screaming as they are being flung into the sea. The ship is being broken apart and begins to sink and pieces are floating on the surface……..Yes, you have a lot of time to think out here and it’s not always good thoughts. LOL

2 thoughts on “Working The Night Watch”