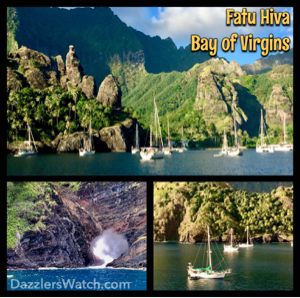 We had two marvelous days at Tahuata but it’s time to move on. With a 90 day visa and so many amazing places to visit you don’t get a chance to spend much time in any one place. Today we are off to see the most photographed island in the Marquesas … Fatu Hiva and the Bay of Virgins. Originally it was called the Bay of Penises because the rock formations resemble phallic symbols. Apparently when the Christians came to the island many, many years ago they decided that Bay of Penises was inappropriate and the bay was renamed to something a bit more Christian like. We’ve also heard that the Christians were so offended by the penises on the tikis around the island that they broke them off. Hmmm…sounds a lot like people in America today. If you’re offended by something, rather than accept that it is different and ignore it, you just destroy it. Oh well, that’s another discussion for another time.
The forty-mile jaunt from Tahuata is all into the wind and swell. It is certainly not a comfortable ride by any stretch but it only takes us about eight hours and we are rewarded with one of the most beautiful sites we’ve seen since our arrival in the Marquesas. It seems that each place we visit is more beautiful than the last.
It’s about 1500 hours so the warm afternoon sun is casting a golden glow upon the mountains and the bay. There are fifteen other boats anchored in the bay. SV Nightide and SV Patience are here and we decide to drop anchor right between them. The place definitely lives up to its reputation for being a beautiful anchorage. The water is pretty clear but deep blue due to the black sand and it makes the perfect contrast to the golden shore.
With the anchor down we proceed with our traditional anchor down beer. After all, you can’t break a great tradition like that. As we are sitting in the cockpit enjoying our libations we receive a call on the radio from Ian of SV Nightide. He tells us that a couple of manta rays are heading our direction. I grab my camera and hop on deck. Not just a couple of them, but six are headed our direction. They aren’t quite as large as the one we saw in Tahuata but it is still a wonderful treat. Their large black wings glide gently through the clear blue water as the wing tips breach the surface from time to time. Their mouths are open wide to take in the plankton on which they feed. They are so majestic and graceful and I’m in heaven just watching them as they swim around the boat. We see a few other boaters in their dinks chasing down the rays so they can swim with them. No harm in that; it’s just that we’re not so sure about swimming in bays with black sand bottoms. We’ve been warned that it’s difficult to see sharks coming toward you even in clear water. This is the South Pacific and sharks are everywhere. Ed & Linda on SV One Fine Day had about a six footer swim along side their boat in Tahuata. We will be swimming in the bays but we’ll save that for the white sand bays. For today, we will just enjoy watching these majestic creatures from the deck of Dazzler. We haven’t even left the boat yet and something tells me I’m going to love this place!
Until next time…
Jilly