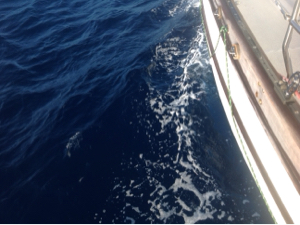 4.14.18 @ 1000 Local, 1700 Zulu Day #20
Latitude: 01°12’N Longitude: 132°19’W Covered Distance Last 24 Hours: 129 NM Distance to the Marquesas: 640 NM Distance from Punta de Mita, Mexico: 2387 NM Weather: scattered clouds 05% Winds: E 17 knots Sea State: 2.0-3.0 meters Barometer: 1012 Crew’s Mood: Loving life. Would like to go for a walk about soon!
Personnel Safety Device Number Two
A few days back We posted an article regarding Jack Lines. Well, I should have included this as well. But, I saved it for a separate article. Jilly asked me this questioned several months before we left Mexico. How do I get back onto Dazzler if I go over the life lines? I knew how I would board from the water, but she didn’t have any idea. When I purchased Dazzler back in 2003, she was equipped with one of those nautical looking teak boarding ladders that hooks to a couple of pad eyes on either side of Dazzler’s hull. The issue with that ladder is that it took up half the space in the lazarette. If we put it in the lazarette, where would things like drogues boché balls and boat supplies go? There really wasn’t a place on deck to mount it either So away that ladder went when the metal work was done to the stern of Dazzler. A bifolding ladder was incorporated into the stern rail of the stern pulpit/kin and queens seat area. I guess that ladder goes two ways? Who knew. I think Grape Ape knew it, but didn’t tell us about it.
Dazzler was also equipped at the time of original purchase with a stainless steel emergency ladder mounted to her aft port hull (left rear side) for use as a way to reboard her. It is tied up with a slip knot and easy to grasp the lawnmower starting handle to free it. You have to be careful not to jerk it lose as the ladder may swing downward violently and render you unconscious. Hey! I’m already in a bad situation here now I’m unconscious? The issue with the emergency ladder is it is only on one side of Dazzler. Ou would have to work your way back to the aft port quarter to use it.
Enter ideal from Dan and Jilly. So I had some ⅜” line that was plenty long enough to be strung from the bow hawser cleat on each side aft to the midship hawser cleat leaving a nice loop. The line then looped aft to one of the old wooden ladder pad eyes where it was secured with a luggage tag style knot and then looped aft to the aft hawser cleat where it was secured. This design made three nice loops just above the water line that you could get a foot onto and use the line as tight rope to get a leg over the gunwales and ultimately onto the deck of Dazzler. It almost sounds too simple, but it works. Being able to get something to push up against with one of the largest muscles in your body makes sense. Thus increasing your survivability if your not unconscious from being hurled over the life line in the first place. On a side note, the emergency boarding ladder is Jilly’s nemesis from a stainless steel cleaning project stand point. Oh well, it can’t all be easy or everyone would be doing this. Sometimes the anchorages are just too crowded as it is.
The lines on the outside of Dazzler’s hull have another benefit, but you’ll have to stay tuned for that article. Perhaps on day 23. Until then talk to me Goose. Kick the tires and light the fires. We are smoking along at 6 knots speed over ground. Watch out this train is leaving the station.
Cheers!
Captain Dan