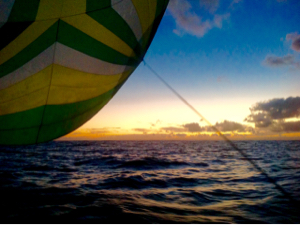 4.1.18 @ 1000 Local, 1700 Zulu Day #7
Latitude: 15°18N Longitude: 115°41W Covered Distance Last 24 Hours: 99 Distance to the Marquesas: 2046 Distance from Punta de Mita, Mexico: 744 Weather: 20% clouds Winds: 9 knots from the north Sea State: 1’-3’ choppy swell Barometer: 1016 Crew’s Mood: Great! Thank god the head was an easy fix!
Hey there Dazzler’s Watch Followers,
First off, the queen has decreed that there shall only be her format for statistics on these posts. Whatever, to keep peace onboard, I’ll chose another battle to stand up for. She can have this one.
Second, we just experienced the Mexico time change hour forward. It’s a good thing we use Universal Time Coordinated, UTC. There are no land marks out here to know when we cross over into the next time zone. The only thing for certain is the sunrise was awesome, the full moon rise last night was awesome and we’re going someplace on the water.
Yesterday, we got the spinnaker up early and our winds built up to 10 knots and a speed over ground of 5+ knots. Wow! I don’t think our bottom paint is rated for that kind of speed. I better go check the fine print on the paint can. Salvador, what say you? Needles to say it is refreshing to have some way on.
Underway and making way are two different things. For you nautical people out there this is United States Coast Guard safety course 101. But for the rest of you out there, raise one eyebrow and say uuugh to yourself. Underway is when the vessel is in the water and not tied to a dock, mooring or anchored. Making way or way on is actually moving in a direction. Even if it’s not the direction you want your boat to go. You know, like prop walk, current, wind and where the hell is this boat going. Why isn’t it backing where I want it to go. All of which are in an entirely different section of the Boating for Dummy’s hand book. Next time you see me ask and I’ll give you a signed copy. Ha ha ha!
Lots of maintenance completed underway during the last few days. Including the throne of white gold located in Dazzler’s head. Okay, so head is a nautical term for bathroom for those cliff dwelling friends of ours. That’s what we mariners in Marina Del Rey call all the massive number of multilevel apartments that surrounded the marina slips. If you can’t be a cliff then be a cliff dweller. Ha ha ha. Anyway, back to the head repair. Two days ago, It started like this…Honey, you need to get a nap in before the Radio Net starts. You’ve been up since 0430 hours local. Okay, okay, okay. Wait just a minute, I’ll go use the head first before you go get a nap. Okay. Moments later, Honey! The handle doesn’t move or pump or anything. WHAT? You might want to look at that before you take a nap. I didn’t know the next battle was going to come so soon.
Great horny toads! Or those of you who know me…insert the correct expletive now. There went that nap. There are many marine heads, but this one is mine. Some use a salt water source and some use a fresh water source to flush away your business. Dazzler has a Groco model K salt water manually flushing head. The Groco’s are known for their reliability. However, the hoses that connect the head to the overboard discharge or black water holding tank have a nasty habit of building up a crystalline substance that clogs the hose like plaque in an artery. When it decides to go full block is usually at the most inconvenient time. Like right before a nap.
First thing I had to do was assess what was wrong. After a brief examination, I deduced that the head was fine, but the one hose that I didn’t replace a few months back was the culprit. So being Mr. Marine Chandlery, I carry a supply of many things including a piece of 1.5” sanitation hose. It just happened by accident that the piece of hose I had was exactly the length I needed to replace the plugged hose. An hour later the hose had been replaced, I was showering to de-stink, and try to get a short nap before the HF Radio Nat started.
Just another day in the life of sailing the ocean. You know it really doesn’t matter if the boat doesn’t leave the slip or not. No matter where it is, equipment has a shelf life. I prefer the last forever thing myself, but when I wake up from that dream there will be something else to fix, tweak, fiddle with or outright replace. The sooner you accept that philosophy, the sooner you can get on to the fun stuff.
Okay, after any job on Dazzler there is the reward of an ice cold frothy golden liquid that follows. Damn it! We don’t drink alcoholic beverages underway. Just in case something were to happen you want all your operating brain cells. I’m over 60 now and I’m not sure where they are all hiding. LOL! This trip is really just an excuse to go on the World Dazzler No Alcohol Diet Plan. After almost one week I can actually see a difference and this time I’ll keep it off! LOL
That’s it for now. Keep he wet side wet and the dry side dry.
Cheers!
Captain Dan