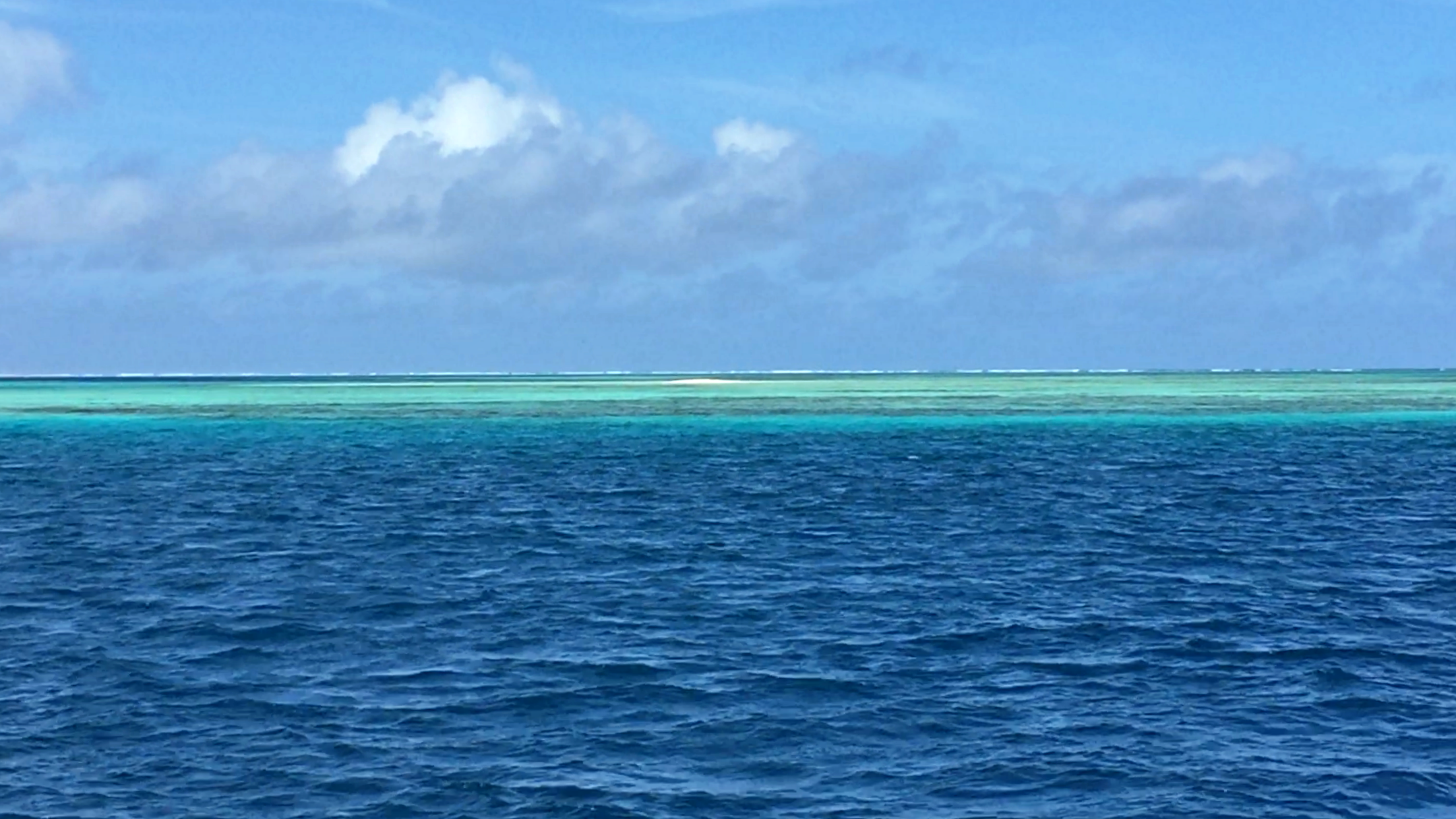 While we loved the anchorage near Mafana and Ofu and really wanted to visit the village in Ofu, we are so incredibly intrigued by Kenutu, Lolo and U’muna. Just watching the waves crashing over Lolo Island made us want to visit it. Also, the SV Soggypaws Compendium that we use for information about the islands says it is a must see so decided that one night here was enough and we headed out to Kenutu.

I don’t mind telling you that I was a bit on edge as we left and headed that way. Kenutu is on the very eastern edge of the Vava’u group of islands. The outside edge means there are reefs everywhere. And when I say everywhere, I mean EVERYWHERE! The cruise over there is a short one…maybe and hour, but the path getting there is fraught with danger. There are a couple of shoals you have to cross that get as shallow as nine feet. Dazzler only draws six but with the way bommies grow and crop up out of nowhere you never know what you will find until you are there.

Dan got on the radio with another boat that was anchored in the Kenutu anchorage. We don’t know them but can see on them on the AIS. We also see that they are almost sixty feet, which means they have a deeper draft than Dazzler so he wants to know how they got there and what they thought of the reefs. Their Captain was very kind and offered a few suggestions but none were anything Dan hadn’t already thought about.

By 1100 hours we had pulled our anchor and were making our way toward Kenutu. Dan could see that I was a bit nervous about the passage so he made his jokes and did his best to keep me at ease. I did my best to calm down and not show the true extent of my anxiety. After all, I’m the one he puts on the bow to see the things he can’t see from the cockpit. Yes, he has a lot of trust in me. I said a few prayers and quietly asked our guardians angels to watch over us as we cruised along.

The first few twists and turns through the reefs were not so bad. I was on the bow with my headset on and Dan was calling out the depth. The shallow spots were not as shallow as we expected since we were there near high tide. Once past those spots there was a pretty decent channel with about sixty feet of water. Of course a couple of hundred feet on either side of us there were these huge, shallow reefs with waves violently crashing on over them but I was just trying to stay focused. I knew the real test would come when we turned off to the east and started toward the anchorage.

Fortunately as we make the turn the sun comes out and it’s high in the sky. That always helps to see what’s under the surface and of course the crystal clear water doesn’t hurt either. Also it appears our charts are deadly accurate and we are moving through a perfect channel in between the reefs. It’s not a deep one, only 9-12’ but it’s a channel and it’s enough water for Dazzler. Of course the entire time my sphincter factor has gone from a cheery yellow to a blazing fire red! It won’t get better until we have an anchor firmly set into the ocean floor either.

Before I know it we are dropping the anchor. I put Dazzler in reverse and give her some throttle to back down on it. I’ve got a little ritual I go through as I watch the instruments…speed and depth mainly. Soon I let off the throttle and let Dan know we are secure. Today it’s not an anchor down beer for me. Nope, I went straight for a vodka drink…a well earned vodka drink at that!

As we sit in the cockpit congratulating each other on a smooth passage we are simply astounded by the sights and sounds around us. We are anchored in front of Kenutu Island and just to our right is Lolo Island, the huge rock we’d been watching last evening. Here we are now just 300 yards away and we are watching and listening as the Pacific Ocean crashes around and over it. There are blowholes in the middle of the island and it’s amazing! The sound the ocean makes as it forces the air from the blowholes is incredible. It reminds me of an angry elephant huffing and puffing. The water around Lolo is deep blue in places and clear, pale green in others. It’s such a sight that I could sit and look at it for hours and hours and never get bored.

We don’t stay on the boat long though because we know there’s plenty to see and do here. First up is to stop by the nearby boat and thank the Captain for his assistance and information. Well let me tell you, THAT was interesting. As we near their absolutely beautiful boat we see him drop into their cockpit and do something. We weren’t sure what but soon he comes out and we greet each other. He seems very nice as we sit and chat about the entrance to this anchorage. Soon, his lady comes from the bow. She’s butt ass naked! Yep…naked as a jaybird. She tries to discreetly step into their cockpit but hello, you can’t unsee what you just saw! She did put on some bathing suit bottoms but no top before she comes walking out and sits down with her boobies dangling at the rail just about a foot away from Dan’s head. I’m doing everything I can to avert my eyes but it’s kind of like that traffic accident on your way home, you just want to look at it. Not because I’m interested but because I can’t believe she came to greet total strangers like this. Thank goodness I had on sunglasses so she couldn’t see me looking directly at the dink floor. Dan, the master of observation, later told me he noticed that she had a nipple ring on that had several beads. He must have amazing peripheral vision as I never once saw him look directly at her. They aren’t young people either…probably in their 50’s or 60’s. Maybe it’s just me but there comes a time in your life when you should keep your nakedness to yourself and your mate. And I’m really not trying to be judgmental. I get that nudists exist and really don’t care. I just don’t want to have to see it. Given the environment we made our visit very short but they did invite us back for sundowners. We agreed even though I was a bit shocked and wondered what we’d come back to later in the afternoon. Whatever it is I will just keep trying to remember that we are on an adventure, right?

Next we headed to shore where we found the jungle path that leads to the other side of the island. It wasn’t a long hike but it did take us through a fairly dense and humid jungle. As we exit the jungle on the east side of the island we are greeted with some of the most amazing sights. The ocean is violently crashing on the island, which is made of lava rock. Lava rock is incredibly intense and rugged. It’s sharp and you certainly don’t want to fall on it or you’ll end up needing stitches.

We spent about forty-five minutes on that side of the island just enjoying the rugged beauty God put there. The jagged shoreline actually reminds us of the California coast. Once our tour was complete we headed back to the other side of the island. It’s sort of crazy when you exit the jungle here. On one side the ocean is so intense and violent that you know she could kill you in a moment yet on the other side, just 300 or so yards away, the bay is so calm and beautiful you feel like you have reached Heaven itself. Heaven and Hell are so close to each other it’s crazy!

We took a little tour on Sparkle before heading back to the boat for a bit. We both took showers on deck and prepared for our sundowner experience. I’m sure I don’t need to tell you that I was a bit on edge as we headed out. I was pleased to find once we neared their boat that both were completely clothed! THANK YOU JESUS!

WOW! What an amazing and beautiful boat they have there. It’s easily a $1.5 million yacht. You don’t even have to wench in the lines to sail. It’s all done electronically! And it’s appointed like a suite at the Ritz. They even have a washing machine and a dishwasher on board! It was pretty nice. Of course we are always looking at the potential issues and a boat that is completely electronically controlled means there is a lot that could go wrong. Computers, even marinized ones, are highly susceptible to corrosion and problems in this environment. As beautiful as she is, we’ll stick to the more simple stuff.

We had an enjoyable time with our new friends. They live in Vanuatu, which is not too far west of Fiji. It’s one of the poorest nations in the world. It’s a place we hope to see before we leave the South Pacific. Apparently they live on an island there and they rarely ever wear clothes! They say you get used to it but I’m thinking this southern belle would not! He said that clothes only serve two purposes… 1. They provide protection against the elements and 2. They prevent others from being uncomfortable. I would add that they prevent others from becoming physically ill at the sight of my naked body but, you know, that’s just me.

Anyway, we did have a nice time with them and enjoyed yet another great day in our adventure.